Last year, the USA sold arms in the amount of $66.3 billion, which became an absolute record. These data were presented in the report from the Congressional Research Service, Finmarket said. 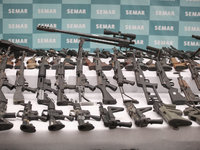 The share of U.S. weapons on the global market totaling 85.3 billion dollars made up more than 75 percent. A year earlier, the US arms sales made up $21.4 billion. Russia took the second place on the list. However, the report said, the volume of Russian arms sales in 2011 totaled only $4.8 billion, Rosbalt reports.

According to Mikhail Dmitriev, the former head of the Federal Service for Military and Technical Cooperation, Russia's arms exports in 2011 were evaluated at $13.2 billion. In 2012, it is expected to have a slight increase to $13.5 billion.

According to Anatoly Isaikin, the head of Rosoboronexport, the order portfolio for the delivery of Russian weapons abroad is maintained on the average level of $33-35 billion.