Not that long ago, the Investigative Committee of Russia accused Ukraine of discrediting the Russian army in the eyes of the public during the conflict in South Ossetia. Ukraine, of course, denied the accusation. What does Ukraine think and how true is the statement that Russian soldiers have discredited themselves? 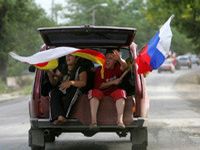 It has been four years since the armed conflict in South Ossetia in 2008, but the consideration of all aspects of this highly publicized armed conflict is far from over. Not that long ago, Russia's Investigative Committee has publicly stated that the Ukrainian authorities deliberately discredited the Russian army in 2008 in Georgia - both in the eyes of the innocent civilians of Georgia, and in the eyes of the world. According to Vladimir Markin, an official representative of the ICR, the Ukrainian authorities "helped Georgia to create a negative image of the Russian soldier."

As noted by Markin, Ukrainian mercenaries before the arrival of the Russian troops have visited the small towns of Georgia and changed into the uniform of the Russian army. Then, they would commit acts of vandalism, looting and violence against civilians and videotaped and photographed their actions. In addition, Markin argues that they have even clothed dead Georgian soldiers in civilian clothes to show how the Russian army destroyed the civilian population.
Needless to say, this is quite a serious accusation. Incidentally, the criminal case of the events in South Ossetia in August 2008 is still under investigation. The authorities want to ensure that the International Criminal Court also holds its own investigation. So far, the investigation is set to continue until February 8, 2013. Not that long ago, investigators said they had irrefutable evidence that the Georgian government and top security officials were directly involved in those crimes.

Of course, the Ukrainian authorities deny any involvement - Volodymyr Ogryzko, ex-Minister of Foreign Affairs of Ukraine, called all the allegations fake. According to him, there was no point in discrediting the Russian soldiers in South Ossetia because they have done it very well on their own. He believes that the Russian authorities simply want to shift attention from the real perpetrator to the victim.
The leader of the Ukrainian Party "Brotherhood" Dmitry Korchinsky believes that Russia is just trying to distract the world's attention from numerous evidence of looting committed by Russian soldiers at large scale. As he noted in his recent statement, the most memorable videos are not those of the conflict between Georgia and South Ossetia, but the scenes of looting and vandalism by the Russian soldiers. According to Korchinsky, such an accusation sounds pretty silly considering that Ukraine was practically not involved in the conflict in Ossetia.

Ukraine's authorities are not staying away. As stated by the Ministry of Foreign Affairs, the Russian accusations do not yet have the evidence. The officials refused to comment on the situation at all, since, in their opinion, the ICR is not authorized to disclose foreign policy information. However, they noted that mercenarism is a crime, so if the fact is confirmed, the perpetrators will be punished. However, at the end of 2008, Georgian President Mikhail Saakashvili categorically denied that Ukrainian mercenaries participated in the Georgian conflict. Did the Russian army undermine its status in the eyes of the public, or the Georgian authorities who attracted Ukrainian troops for the "black PR" are to blame? It is worth remembering that Russia sent troops into the conflict zone with peacekeeping purposes, to call Georgia to order. This fact alone raises the status of the Russian army in the eyes of the public and the civilian population of South Ossetia.

In addition, after the cessation of hostilities TFR checked each statement of wrongdoing by the Russian soldiers against civilians, but not a single fact was confirmed. This is evidenced by the testimony of over 2 thousand Russian troops, the investigative staff, and documents. Incidentally, 100 respondents in South Ossetia have confirmed that the Russian soldiers not only did not commit acts of vandalism, but rather, prevented the marauders and bandits from robbing, burning and commiting other crimes.

TFR believes that Ukrainian mercenaries involved in the campaign at the border of South Ossetia did it with the support of the Georgian authorities. The blame of the highest authorities of Georgia has been practically proven. Yet, Russia still cannot hold them accountable for their actions, as it is not within its competence, because a decision of the International Criminal Court is required.

So far, the ICC has not initiated criminal proceedings; however, Markin believes there are all grounds to do it. For example, he thinks that the attack on the troops of the Russian Federation by the Georgian side provides a good reason for the investigation, along with the use by Georgia's army of powerful weapon against the civilian population of South Ossetia.

During the military actions in August of 2008, the Russian troops were able to oust Georgian forces from South Ossetia and defended its independent status and protected the civilians. Now the independence of Ossetia is recognized by a number of countries in the world. Georgia believes that the region was occupied by Russia and as a protest the state withdrew from the CIS. Many countries continue to believe that Ossetia is still part of Georgia. During the operation in South Ossetia, 64 army soldiers of the Russian Federation were killed, 15 of which were peacekeepers. The investigation is not completed and the guilty have not been punished. We can only hope that the International Court will initiate a case to bring the true perpetrators to justice.
Sergei Vasilenkov