The Other Side of Russia's Medical Market

The turnover of the shadow market of medical services in Russia last year amounted to 182 billion rubles. This is nearly 12 percent of total government spending on health care. Unofficially maintenance of the domestic health industry is forced by physicians who use sacramental: "That's not us, such is life."
Specialists of the Fund "New Eurasia" and Agency "C-Media" undertook the investigation of this covert channel of co-financing of the Russian medicine. They surveyed 1.5 thousand patients and 347 physicians in three cities - Moscow, Tver and Novosibirsk. Gifts and cash payment allow physicians to increase their official salaries by over a third (37 percent), researchers reported. 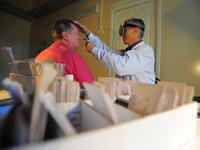 Based on the average salary in the industry (18,500 rubles, or approximately $650), and the number of employees (2,268,000 people), the researchers estimated the approximate amount of funds rotating in the informal market - 182.7 billion rubles.

Interviewees said that the "informal payments are needed for survival" as they provide for "the doctors' normal life and patient's health." This does not fit conventional economic logic because doctors do not need healthy patients to maintain "normal life." According to a survey of physicians, insurance programs paid 59 percent of the total medical care bills received by the respondents in the last year. Patients had to pay the rest out of pocket, of which 15 percent was given to the doctors in an "envelope", and 26 percent was paid through the official cash register.

According to the survey, only 50 percent of patients received medical services under the insurance programs and did not pay extra officially or directly to staff. Another 41 percent of patients paid for services rendered to a cashier at least once. 22 percent of respondents informally paid their physicians. Of these, 14 percent at least once paid in cash, and gifts were presented by eight percent.
The line between appreciation and actual extortion on the part of doctors is very fine. It is one thing when a doctor accepts a gift or cash in an envelope after a successful treatment, and when a patient thanks the doctor based on their ability and financial capacity rather than a tariff. If the payment occurs during treatment, and even more so, when well-defined conditions for its commencement or continuation are provided, we can definitely talk about the informal market of payment for medical services.

Incidentally, the latter form is widely used by administrative staff of medical institutions. Nurses and head doctors are the main bribe takers in the medical sphere.

As noted by 37 percent of patients, they are faced with negative attitudes from health facilities that created an artificial shortage of medical services, directly denied free medical treatment and required to pay for services for which, according to the patients, they did not have to pay. Commonly charges are taken for the treatment of cancer, cardiovascular diseases, as well as in dentistry and gynecology.

"The most common attitude in relation to such payments is" conscious "non-interference. The struggle against this phenomenon has formally demonstrative nature, as an informal payment is perceived as an opportunity to provide decent wages for physicians," the authors of the study concluded.

The findings of the analysts are disappointing. The medical field continues to be actively commercialized due to the weakness of health insurance sphere and low levels of funding and management, experts say. Doctors, for example, argue that the money for insurance programs often settles down in the pockets of health facilities rather than physicians.
As for cash payments, ample opportunity for manipulation is created by the uncertainty about the free and paid services. In addition, Russia is not fighting the system of bonuses that are paid to physicians by pharmacists for prescribing certain drugs. Proceeds from the sale of such drugs in the form of a commission to the prescribing doctors make up a significant portion of shadow incomes of the doctors.
Anatoly Miranovsky