Mercosur (Mercado Común del Sur) was founded in 1991 by Argentina, Brasil, Paraguay and Uruguay with the purpose of promoting free trade and free movement of people within its boundaries.

The Common Market of the South uses three languages: Brasilian Portuguese, South American Spanish and Guaraní, an indigenous language spoken in parts of Argentina and Brasil. The motto is "Nuestro Norte es el Sur." Our North (goal) is the South.

Venezuela signed a membership agreement as early as June 2006, but has been waiting ever since, due to the Paraguayan right wing senate blocking its entry.

Now the tables have turned. Paraguay was recently suspended from Mercosur, due to breaches of the democracy clause, thus opening the door for Venezuela. As of July 31, Venezuela is a full member of the bloc, with speaking and veto rights.

Now Mercosur reaches from the Caribbean Sea down to Patagonia, the southern tip of the continent. With Venezuela's entry, Mercosur has become the world's biggest food producer and biodiversity reservoir. Counting on Venezuela's huge crude oil and gas reserves, Mercosur has furthermore turned into the world's 5th largest economy and its 4th largest trading bloc, with a regional GDP of more than 3.3 billion USD. Mercosur comprises a territory with about 260 million inhabitants.

President Hugo Chávez is well aware of the attraction and power that Venezuela's huge petroleum reserves may exert. He suggested creating Petrosur, a petroleum alliance within Mercosur. During the Mercosur Summit in Brasilia, Venezuela's state oil company PDVSA and Argentina's recently nationalized oil company YPF signed an agreement to strengthen their alliance.

In his speech at the Summit, Hugo Chávez stated that the 31st of July was "a historic moment" for Venezuela, a "historic day which shall be commemorated and celebrated. Venezuela's entry into Mercosur places us in our exact geographic, geo-politic and geo-economic dimension. The full incorporation of our country into Mercosur represents the interests of Venezuelan society. Now we are where we always wanted to be. Mercosur is the greatest locomotive for our independence and will accelerate our integration," he emphasized.

President Chávez mentioned that Venezuela wanted to develop its agricultural, industrial and touristic potential with the support of Mercosur. "Venezuela possesses an enormous agricultural potential with over 46 million hectares of land to be cultivated. It also has industrial potential," he said, referring to the natural resources of bauxite, coltan (columbite-tantalite), iron, precious stones and other minerals.

One Venezuelan entrepreneur who is very pleased with this new turn of events is Arnoldo García, managing director of Canteras & Mármoles (Quarries & Marbles), one of Venezuela's largest and best-known firms for stone masonry and building materials, specialized in granite and marble.

He says that the Venezuelan trade of granite and marble will augment by at least 40 percent due to Venezuela's integration into Mercosur because of more technology transfer and larger export markets. "Now that we belong to Mercosur, we can export our marble to Argentina, Brasil and Uruguay without any problems," he pointed out.

"It is true, in these days more than ever before, that unity means strength. United we are better and stronger. United we can offer a wide range of products, share our experiences and advance each day a bit more towards the consolidation of our Latin American Common Market," the entrepreneur knows.

Arnoldo García explains that Venezuela is a privileged country in many respects, not only because of its location and the human qualities of its inhabitants, but also because of the wide range of minerals to be found in Venezuelan soil. This is of great advantage to the local granite and marble industry.

"Thanks to President Chávez, Venezuela's integration into Mercosur is a historical feat. Venezuela is the spearhead for many cultural, economic, social and sportive projects. This gives us special importance in the eyes of the world," he emphasized.

Arnoldo Garciá belongs to the third generation of immigrants who came to Venezuela at the end of the 1930s. The family has been working in marble masonry and monumental masonry, enlarging the firm from one decade to the next. Arnoldo García says that his family enterprise is continuously modernizing technical procedures to stay on top of the business.

He is glad that Canteras & Mármoles was the firm chosen to produce a singular piece of granite for the new Mausoleum of El Libertador, a modern annex to the National Pantheon in Caracas, where Simón Bolívar's mortal remains will be kept. The huge, tentlike structure was designed by two Spanish architects.

Arnoldo García points out with pride, "Now future generations visiting the Mausoleum will be able to see the craftsmanship of our marble masons, the finest of the craft," adding that his firm gives good training to the staff to maintain the artistic and productive quality of all sculptures, structures and building materials produced.

The Venezuelan President knows that Venezuela's entry enhances Mercosur, but he also knows that Mercosur will bring enormous advantages and advancement for his country. 240.000 new jobs will be created in Venezuela.

"A number of Argentine and Brasilian firms have already knocked on our door," the Minister of Industry announced. "They want to install themselves in our territory, which is motivating from a geographic and energetic point of view. We hold a favorite position for imports and exports, due to our location on the Carribean Sea," he explained.

"Furthermore, production costs are lower than elsewhere, because energy costs are low in Venezuela, compared to other countries. So our country is privileged in many aspects," Ricardo Menéndez affirmed.

The Argentine side is happy, too. During her address at the Summit, President Cristina Fernández de Kirchner expressed her joy that "finally the loneliness is over, because we have found each other," pointing out that the Mercosur countries "represent the social and historical force of their peoples."

Julio de Vido, Argentina's Minister of Federal Planning, highlighted the growth in Argentine-Venezuelan trade relations. "Before Néstor Kirchner became Argentina's President in 2003, commerce between both countries was 156 million USD. Today, we have arrived at 2.3 billion USD. Today, our nations have many common interests," he said.

Venezuela will have four years to adapt to all Mercosur norms, especially to the common external tariff (CET) which is fixed at 10 percent. Venezuela will also have to eliminate all tariffs for Mercosur countries within the given timeline of four years.

The institutional structure of Mercosur is defined by five public agencies:  The Common Market Council conducts its policy and is responsible for compliance with the objects and time frames. The Common Market Group is the executive body of Mercosur.  It coordinates, organizes and supervises all work subgroups. The Administrative Office keeps all Mercosur documents and bulletins in Portuguese and Spanish. The Joint Parliamentary Committee has both advisory and decision making functions. The Trade Commission follows up on the development of issues and proposes guidelines.

Mercosur Headquarters are located in Montevideo, Uruguay. At the Summit, Uruguay's President, José "Pepe" Mujica, reminded the others in his speech that they should not forget but include "los olvidados," those human beings who are easily forgotten, the workers, the afro-descendents, the indigenous groups, all those who walk about in "shirts and sandals."

He emphasized that Latin America holds "a historic debt" to include all of its citizens, rich or poor, in order to build a just and egalitarian society with solidarity among all human beings.

On another, more commercial note, he announced that he was glad about a new deal between Uruguay and Venezuela. The commercial maritime route connecting Venezuela with Santos in Brasil will be prolonged to reach Montevideo in Uruguay as well. It will give new impulses to commercial activities between the Caribbean Sea and the South Atlantic, President Mujica believes. Currently, the commercial fleet on this route consists of three ships.  They will transport mainly rice and medical supplies between Caracas and Montevideo.

President Mujica pointed out that Uruguay imports 20 percent of its petroleum from Venezuela. "It is not only that Venezuela now enters Mercosur, but also that Mercosur enters Venezuela, which is a country of strategic value for Latin America," José "Pepe" Mujica stated.

A fact that might be overlooked, but is equally important, is Mercosur's objective to promote educational integration as a fundamental factor for the regional integration process. Educational courses at the primary and secondary level are recognized by all member states. They issue educational certificates which are valid everywhere within the bloc, allowing students to conclude their studies in different locations of the Mercosur territory. Completed studies are certified by using an equivalency table to determine the level achieved.

The Brasilian President, Dilma Rousseff, alluded to this fact in her welcome speech at the Summit in Brasil's capital, Brasilia. She said that one of the main challenges of the bloc in the future will be to increase competitiveness which is "ultimately linked with human resource training." President Rousseff proposed to build a "cooperation network made up of universities and research centers."

She welcomed Venezuela into the bloc and expressed her happiness about the new trade deal, signed a day before the official Summit meeting began. Venezuela will buy six new planes for its commercial state airline, Conviasa, from the Brasilian firm Embraer. Hugo Chávez said that Conviasa must recuperate some of the national routes which were lost by the privatization of Viasa, the predecessor airline of Conviasa.

This Brasilian-Venezuelan deal is worth 270 million USD. The six planes of the type ERJ-190AR, which shall be delivered until the end of this year, have a capacity of 114 seats each, and can fly non-stop for five hours, a stretch of about 4.000 kilometers, at a maximum height of 41.000 feet.

The atmosphere at the Mercosur Summit meeting was festive and joyful. Besides doing business worth several millions, the four presidents laughed and told jokes, calling each other by their first names. The senior, Uruguay's President Mujica, is simply "Pepe" or "Comrade Pepe."  Clearly, these four are good friends, they like and trust each other.

Outside of Palacio Planaltos, people were joyful as well. More than 500 members of such organizations as Movimiento Sin Tierra (MST), Vida Campesina, Partído de los Trabajadores (PT), Partido Comunista do Brasil (PC do Brasil) and Foro de Sao Paulo had gathered to give Venezuela a warm welcome.

"All of the Brasilian left supports Venezuela's entry into Mercosur," said Alexandre Concecao, a leader of MST. "With Venezuela's membership, we have the hope that this organism will be open to the integration of the peoples. This goes far beyond the merely commercial aspect. Venezuela will bring its experience in social programs, destined to improve the quality of life for the poorest strata of society," he said.

With Venezuela's entry into Mercosur, last but not least, the doors have also opened for other progressive Latin American countries to join in, for example Bolivia and Ecuador, to profit from the Common Market's dynamism and synenergy.

Nuestro Norte es el Sur. The South is uniting and ascending, no longer anybody's « back yard, » but a strong and independent continent. 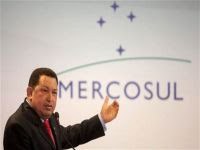