Argentina tangoes its way out of crisis

The West is mercilessly criticizing the Argentine government for a policy of debt reduction, maintaining of solvency and promotion of local producers. All this is because the country did not resort to the loaded assistance by the IMF or World Bank. Now many Argentines believe that the events of 2001 are being repeated, but the situation is still far from the dead end like in Europe. 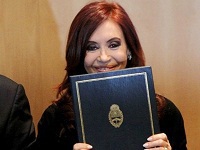 Argentine President Cristina Fernandez de Kirchner fulfilled her promise made in March of this year and announced the transfer of the last tranche of $2.3 billion to repay the government loans of 2001 totaling $19.6 billion. These bonds (Boden 12) were released 10 years ago and "distributed" by freezing the dollar accounts of the citizens. Now the Argentinians will be able to withdraw their savings. Christine made a wise campaign move, paying off the debts that were not acquired by the Kirchner (her late husband, Nestor, was a former head of state who came to power in 2003).

Minister of Finance Hernan Lorenzino is hopeful that the country will be able to overcome the crisis without shifting the burden to the people who are far from wealthy. The Minister added that the bonds will be exchanged at face value because all this time they were freely accessible on the market. "There is an alternative possibility for overcoming the crisis if we place the emphasis on employment," said Lorenzino.

Unlike Europe, Argentina is not stagnant and is trying to get out of the second wave of the crisis in its own way. Given the experience to overcome the crisis and default in 2001, identical to the Russian crisis of 1998, the government did not bank on borrowing from the international funds and developed their own industries and small businesses, encouraged exporters and stuck to strict monetary and fiscal discipline.

The country produces cars (approximately one million in 2011), heavy trucks, agricultural machinery (tractors, combines with high technology), building materials, railway transportation, and household appliances. A program for the development of small businesses (Mi galpón) is being implemented as well as a grand project to build a railway through the Andes with a 52-kilometer tunnel connecting the country with Chile (from the city of Mendoza to the city of Puerto Valparaiso). In terms of scale this project is comparable to the construction of the Panama Canal.

The goal is to avoid the vicious circle of capital fleeing in the financial centers and the return of these funds to Argentina, but in the form of debt at high interest rates. It is not yet possible to stop the capital from fleeing, and it will not be possible in the near future because investors are scared by the recent classic nationalization of the Spanish oil company, YPF. This leads to a more expensive dollar.

However, the Argentinian government is in no hurry to devalue the peso like Brazil did, and does not have sufficient funds to maintain the rate of the exchange of the local currency through the infusion of the Central Bank like Russia does. The Brazilian scenario is not possible at this time since Cristina Fernandez conducts large-scale social programs and needs cheap peso to pay the salaries, allowances and pensions. The correction of the exchange rate would result in the growth of these and other benefits.

Cheap peso is also needed to build up a reserve of the Monetary Fund securities that Argentina, in contrast to Russia, did not do. In addition, former Deputy Minister of Economy Gaston Rossi believes that the main factor that hinders Kirschner in devaluing the peso is a fear of falling domestic demand. The situation is complicated by a panic among the population that in conditions of high inflation (20 percent) rushed to buy US dollars. Under these circumstances, to maintain the liquidity the banks must either borrow or temporarily restrict access to foreign currency.

Christina does not want to borrow, so the second option was implemented. Starting in June, buying and selling of the US dollars in the banks can be done only for the purchase of housing and travel. Non-cash payments can still be maid - this way the authorities avoid tax escapes. To avoid reducing the foreign exchange reserves, the government imposed higher interest rates for deposits in pesos and developed a program of purchase of social housing.

High inflation is also heavily criticized. But in terms of macroeconomics, at this stage, and in terms of the policies to overcome the crisis, cheap peso is so far beneficial for the state. It is beneficial for exporters, banks engaged in debt repayment (Boden 12) and paying low interest on deposits, and government agencies that preserve the level of benefits without regard to price increases.

Despite the "unhealthy" peso, inflation, falling GDP growth, Argentina's economy is developing. Falling unemployment is the main indicator of improvement. The state of affairs in the main export industries is favorable for getting out of the difficult situations. Due to the drought conditions in the U.S. soybean prices continue to break records. This will affect the cost of meat, the main export commodity of Argentina. "Since the Kirchners arrived, there were dozens of economists and politicians who said:" They will not hold out until the end of the year. "Only the truth is that investors who did not listen to them today are winning big," newspaper El Pais quoted a Spanish businessman operating in Argentina.

The "warmed up" economy creates good prospects for Cristina Fernandez' victory in parliamentary elections next year. No one can dispute the fact that she and Néstor Kirchner repaid the shameful state debt. Christina will most likely receive a majority in both houses of the parliament to reform the constitution and if she wants to, the third consecutive run for president in 2015.