Coca-Cola to be booted out of Bolivia

Coca-Cola, one of the planet's giant corporations, is to be unceremoniously booted out of Bolivia. The announcement was made by Bolivian Minister of External Affairs, David Choquehuanca, who stated that the date chosen, December 21, coincides with the end of the cycle in the Mayan Calendar, the end of capitalism and the start of a culture of life. 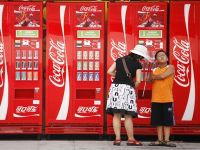 Coca Cola will be expelled from Bolivia on the date that the Mayan calendar enters a new cycle - December 21. According to the Bolivian Minister of Foreign Affairs, David Choquehuanca, the decision was taken to expel Coca Cola on the date of the end of the Mayan calendar so as to create a pretext for celebrating the end of capitalism and the beginning of "the culture of life" in community-based societies. The celebration will take place at the Southern Hemisphere's Summer Solstice on La Isla del Sol (Sun Isle) in Lake Titicaca.

On December 21, 2012, the Mayan Calendar will reach the end. Of what? Not the end of the world, as many believe (and one hopes this time round people will not commit suicide waiting for aliens to come to save them hiding in the tail of a comet). The Mayan Calendar on the beginning of the Summer Solstice reaches the end of a 26,000-year cycle, implying the beginning of a new one.

Whether or not this is the end of the capitalist-monetarist model which we see today remains to be seen: the one which has destroyed full employment and replaced it with endemic unemployment, which has destroyed free universal education and replaced it with a business which churns out generations of simpletons every year who after 12 or 13 years at school are unable to read, are unable to write and whose mental arithmetic skills are absolute zero.

This wonderful model destroyed free universal healthcare and turned it into a business (Sorry, Mrs. Brown, do you know how much money you are actually costing the National Health Service? Now, Mr. Brown do you want us to save your wife if she has a heart attack?) For this new model getting a home has to be a mix between a drama and a chimera and not a birthright, a system where job security does not exist, and neither does security on the streets because policing has been cut back so far the towns and villages have been taken over by marauding packs of animals.

As for Bolivia, imagine the health benefits of not drinking Coca Cola. A can contains 50 mg. of caffeine, while 20 mg, is considered enough to be a stimulant of the central nervous system; the gas - Carbon DiOxide, is considered to be psychologically addictive. The colour is produced by an additive called e-150.