China will continue to buy Iranian oil, despite the pressures of the U.S. on Southeast Asian countries to stop buying oil from the Islamic Republic.

On Tuesday, the spokesman for the Ministry of Foreign Affairs of China, Liu Weimin, advocated  that they maintain trade relations between Tehran and Beijing, and reported that China will continue to import Iranian crude.

During a press conference in Beijing, capital of China, Weimin said that his country buys oil from Iran through normal channels and in an open and transparent manner, so that trade is legal and rational.

The Chinese spokesman stressed that "Beijing is opposed to any country that imposes unilateral sanctions against another, according to its own laws" and then made it very clear that his government will not accept the forced practice of unilateral sanctions on a third country.

China, as a permanent member of the Security Council of the United Nations (UN), has repeatedly opposed the unilateral sanctions of the west, including sanctions imposed on the Persian country's oil sector.

Iran is the third largest supplier of crude to the giant Asian country after the U.S., and is considered the second largest consumer of oil. 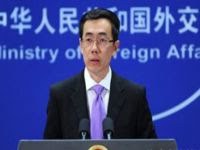