The third crisis of capitalism 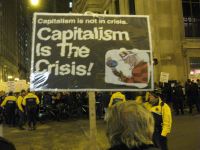 The current economic crisis of capitalism manifested its first signs in the U.S. in 2007, and in Brazil signs of uncertainty already emerge.

The system is a cat of seven breaths. In the last century, two major crises were faced. The first, in the early twentieth century, in the early days of imperialism, the passing of laissez-faire (economic liberalism) the concentration of capital by the monopolies. The economic war for the conquest of markets gave rise to the First World War. It resulted in an "out" on the left: the Russian Revolution of 1917.

In 1929, another crisis, the Great Depression. from night to day thousands of people lost their jobs, the New York Stock Exchange crashed, the recession lasted for a long period, with consequences worldwide. This time the "exit" came from the right: Nazism. And, therefore, World War II.

This third crisis differs from previous ones. And in some ways it is surprising: that countries that once formed the periphery of the system (Brazil, China, India, Indonesia), for the time being they are better than metros. This year, the growth of Latin American countries is expected to surpass the U.S. and Europe. On this side of the world, there are better conditions for economic growth: rising wages, falling unemployment, abundant credit and reduction in interest rates.

In the rich countries, the fiscal deficit is accented by unemployment (24,3 million unemployed people in the European Union), and  State debts. In Europe, it seems that the history - for those who already saw this movie in Latin America - it is being rewound: the IMF starts to administer the finances of the countries, intervenes in Greece and in Italy and, soon, in Portugal.  Germany manages, as a creditor, do what Hitler tried by force - to impose on the countries of the  eurozone the rules of the game.

So far there is no third way out of this crisis. All measures taken by the U.S. and Europe are palliative and will not see the light at the end of the tunnel. And everything can be aggravated by the already announced slowdown in growth of China and the consequent reduction of its imports. For the Brazilian economy, it will be dramatic.

Worldwide trade has plummeted 20%. There is progressive deindustrialization of the economy, which already affects Brazil. What supports corporate profits for now, is that they operate today both in production and speculation. And, through banks, promoting the financialization of consumption. There is credit! Then the bubble burst and defaults spreads like plague.

Will the "exit" from this crisis be the third from the left or right? I fear that mankind is under two serious risks. The first is already clear: climate change. Produced inclusive of the loss of value in the use of food, it is now subject to the purchase value established by the financial market.

There is a growing reprimarization in so-called emerging economies. Countries such as Brazil regress back in time and depend on exports of commodities (agricultural products, oil and iron ore, whose prices are determined by transnational corporations and the financial market).

In the overall scheme, before the power of giant transnational corporations that control GM seeds and agricultural poisons, the Brazilian plantation becomes the weakest link.

The second risk is nuclear war. The two previous crises in the great wars had their exhaust valves. Faced with massive unemployment, nothing like the defense industry to hire unemployed workers. Today, thousands of nuclear warheads are stockpiled worldwide. And there are even nuclear munitions, accurately located for destruction, as in Hiroshima and Nagasaki.

It's time to reject the anticipation of the apocalypse and react. Seek a solution to the capitalist system, intrinsically evil, to the point of devoting trillions to save the financial market and give back to the billions of humans who are suffering from poverty and misery.

It remains, therefore, to organize and create hope, from large-scale mobilization, viable alternatives that will lead humanity, as prayed in the Eucharistic celebration, "sharing the goods of the earth and the fruits of human labor."