Putin and the tall wall against western mischief 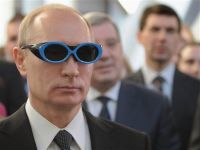 No higher mathematics is needed to figure out that Vladimir Putin presents a major obstacle to US world dominance.

With Putin as President, the West can expect Russia turning further towards Asia. He already announced that he will continue strengthening ties with the republics of the post-Soviet space and cooperate closely with SCO countries.

The Shanghai Cooperation Organization (SCO) was founded 2001 in Shanghai, People's Republic of China. Current members are China and Russia as main driving forces, together with Kazakhstan, Kyrgyzstan, Tajikistan and Uzbekistan.
India, Iran, Mongolia and Pakistan have observer status. Belarus and Sri Lanka are dialogue partners, while the status of Turkmenistan is that of guest attendance.

China Daily wrote, "SCO member countries have the ability and responsibility to safeguard the security of the Central Asian region." Consequently, Russian and Chinese forces control the Eurasian periphery on a permanent basis.

All SCO members except the People's Republic of China hold membership in the Eurasian Economic Community, with joint energy projects in the oil and gas sector, exploration of new hydrocarbon reserves and water resources.

SCO Interbank has been created to be independent from international banking systems.

Putin said at the SCO summit in 2007, "We now clearly see the defectiveness of the monopoly in world finance and the policy of economic selfishness. Russia will take part in changing the global financial structure so that it will be able to guarantee stability and prosperity in the world."

Russia and China engage in a special relationship with many common economic and military interests, besides sharing a long land border. Both countries signed a "Treaty of Good-Neighborliness and Friendly Cooperation" in 2001.

The main fields of cooperation are aircraft manufacturing, biotechnology, computer science, medicine, and nanotechnology.  On the 23rd of November 2010, Russian Prime Minister Vladimir Putin and China's Premier Wen Jiabao agreed on bilateral trade in their national currencies, ruble and yuan.  China is Russia's client for oil and gas as well as military exports, making up 30 percent of Russian foreign sales.

With Putin as President of Russia, EU support for aggressive NATO plans will be curbed, as it is seen to be weakening already due to lack of fuel and funds.

Putin might use pipeline diplomacy to knot the tie with EU. After the disastrous outcome of EU slapping sanctions on Iran and literally sitting in the cold, without Iranian oil, EU leaders will certainly think twice before angering Russia. If Russian gas supplies are cut off, the lights will go out in Europe.

Oil prices are soaring high already. Should gas prices follow this upward trend, the EU might be pushed into the abyss of bankruptcy. It is already standing dangerously close to the edge of the cliff.

"Can you imagine what I would do if I could do all I can," Sun Tzu asked in his famous treaty for military strategy.

Putin is an educated and well-read man. Besides Russian literature on military strategy, he might also have studied the works of the Chinese General and military strategist Sun Tzu who lived in the sixth century B.C.

Putin emphasized several times that he would never use Russian gas sales as means of sanctioning the EU; yet somehow he managed to give his words such a supple twist that a variety of nuances in understanding were produced, reaching from calming appeasement to subtle menace. The western partners who have studied Sun Tzu's work will certainly know what he means.

"Invincibility lies in the defense," Sun Tzu knew. Putin seems to know this stratagem as well. He is modernizing and strengthening the Russian Armed Forces. Russian plans for the defense industry could sound like saber-rattling in western ears, but are deemed necessary for deterrence and Russia's safety, Putin pointed out.

Russia has always been a superpower since its old days as an Empire. After the dissolution of the Soviet Union, Russia sank to its lowest point of no return, but has risen again, like a phoenix from the ashes, to its almost old status of wealth and glory.

This has been no small feat. Russians are thankful to Vladimir Putin for having given them back their pride in Russia, their self-confidence as citizens of a great nation with a long history and proud traditions.

"You have to believe in yourself," Sun Tzu wrote. Putin certainly believes in himself, but above all, he believes in Russia. In the eyes of many Russians, Putin has become the symbol of Russia's return to power.

The fury of the western mainstream media may be interpreted as a sure indicator of Putin's sustained success in strengthening Russia and "reorganizing the world from a multi-polar perspective," according to Jalife.

"The highest form of generalship is to balk the enemy's plans," Sun Tzu said.

Washington's plans of world dominance will definitely be balked by Russia, a prospect that a great part of the non-aligned world is cheering. Putin is a "thorn in Washington's flesh," German-American analyst F. William Engdahl wrote.

"Opportunities multiply as they are seized," Sun Tzu advised.

The tandem Putin - Medvedev will seize the opportunity of continuing their successful cooperation with switched roles, after Putin has won the presidential elections on March 4.

This is another point of discontent for western observers who judge the role switch as being undemocratic. Washington is infuriated by the fact that Putin has a different way of defining democracy.

To Vladimir Putin, it is not undemocratic at all to switch jobs with Dmitri Medvedev, but a very practicable solution. "Democracy East meets Democracy West."

Putin and Medvedev are both members of United Russia and form an inseparable tandem. Washington is enervated because it has not succeeded in sowing discord between the two top Russians.

Putin's training as a former KGB officer might partly be responsible for his clever toughness. In part, it is certainly due to his innate character. He appears to be an intelligent, level-headed, self-disciplined man, a true Russian patriot with a positive vision for the future of his homeland. He can neither be swayed nor bought.

"Move, if it is to your advantage; bide your time if it is not," Sun Tzu admonished.

Russia has been biding time. Now it seems that Russia will move, and the world is very much in suspense, regarding the direction of Russian moves.

We shall wait and see. Russia with Putin as President might have plenty of interesting surprises in store.