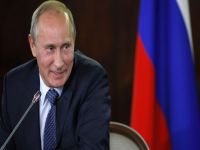 As he had already written in several articles for the news media Izvestia and Vedomosti, he pointed out once more that the Russian economy has done remarkably well in the last twelve years when compared to some of the ailing, failing western economies.

Putin especially criticized the European Union and the USA, wondering about their economic policies. "The eurozone's consolidated sovereign debt is equal to nearly 90 percent of the GDP. Figures differ from country to country 80 - 85 percent, in some countries up 124 percent as in Italy and Greece", he said.

"The US sovereign debt has reached $15.3 trillion, more than the country's GDP. The United States is living on credit."

Because he knew that some US economic experts were sitting in his audience, the Russian Prime Minister politely avoided naming the actual figure of US debt which amounts to a whopping 100 percent of its GDP, a calculation which might have been easily done by the US experts themselves.

Neither did the Russian Prime Minister repeat his famous quote of the USA being "a parasite living off the global economy", which had sent waves of fury and ripples of anxiety through the western world.

In cautiously chosen words, Putin expressed his thoughts about the "current period of turbulence and instability in the global economy" being the inevitable consequence of rapacious, unbridled western capitalism swelled out of proportion, a destructive process for the global economies.

If the USA and their European cronies continue gobbling up future resources, accumulating debt, increasing protectionism and leading trade wars by slapping sanctions on non-allied countries, the worst case scenario might be thinkable.

He sees a decade of challenges coming for Russia. His government will continue to strengthen the Common Economic Space with Belarus and Kazakhstan, founded on the 1st of January 2012.

In his speech, Putin stressed the fact that Russia is the sixth largest economy of the world, well on its way to take on position number five. "Russia's economic growth is more than 4 percent, this is one of the best rates among G8 members," he emphasized.

Russian territory is vast, as anybody looking at the world map might easily notice. It contains large oil and gas reserves, but its best resource "consists of a talented, creative, well trained and educated people, an enormous treasure," Putin said.

In the coming decade, the Russian Federation will have to make great efforts creating modern production facilities, while renovating the existing ones on a continuous basis.

The Prime Minister sees the necessity of shifting from commodities-based industries to an "economy of creation and development," especially in the field of high-tech.

Putin elaborated the special measures that need to be taken for improvement of the investment climate, presenting a first package of ideas, with many more to follow.
Some new steps will be to create fast-track administrative procedures, modernize corporate legislation, strengthen self-regulating organizations and establish an anti-corruption agenda.

The Prime Minister thinks that Moscow is developing into a global financial centre. The rouble zone is expanding, Russia's currency is fully convertible.

In Putin's opinion, the decline of the former Soviet Union was the dire consequence of an "uncompetitive economic system" and "inflexible planning" which started to "malfunction under the impact of the technical revolution."

An overwhelming majority of Russian voters seem to be aware of this fact, as recent polls show. They might cast their ballots accordingly on the 4th of March when the elections for the Russian presidency will be due.

Vladimir Putin is the right man, in the right place, at the right time.