Islamists threaten to severely punish Russia and China. On February 7, a citizen of Qatar, Sheikh Yusuf Qaradawi, the head of the International Union for Muslim scholars, issued another loud fatwa (religious advice): "All the Arab nations, all the Muslim nations ... must not buy their products. We call on the Syrian people, Arab and Muslim nations to boycott them, to stop work with them and not bring them any benefit. " 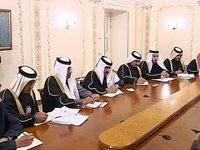 Within the last few days since the address of Qaradawi Arab activists started a social media campaign calling to boycott products from China and Russia. It would seem that it should speak in favor of his influence. Does it mean that the Turkish consumer goods will disappear from the Russian markets and Russian tourists will be refused, for example, entry into Egypt, Indonesia and Tunisia? Does it mean that brave Egyptian and Turkish "Habibas", many of whom live with numerous "Natashas", will deny them the attention, and, following the covenant of the elderly Qaradawi, decide to pursue the much more troublesome and costly in all respects ladies of their own nations who are more reserved and much more expensive in terms of dowry?

Who can imagine that the already-poor in the total mass Egyptians will proudly refuse Russian grain, choosing more expensive Canadian or Australian product? Or replace the Chinese electronic goods with more expensive Western models? Is Qaradawi ready to cover all of these costs from his own pocket? Given the trade turnover of Russia and China with the countries of the Islamic world, the gap from the termination of cooperation with them will be hard to fill even by the mighty boss of Qaradawi - Qatari Emir al-Thani.

The views of commentators varied. The President of the Middle East Institute Yevgeny Satanovsky believes that "Qaradawi is a very influential figure among Sunnis. He can be called Sunni Khomeini. He is traditionally distinguished by unconcealed sympathy for Hitler and a pronounced anti-Russian rhetoric, dating back to the days of the Soviet invasion of Afghanistan. Then he issued a fatwa calling to fight against the "invasion", which many Muslims responded to. Now no one asked him to attack Russia, and these things in many ways should be considered in terms of aggravation of Russian-Qatari relations, which is clearly evident during the recent attack on our ambassador in Doha."

Another opinion is from an expert from the Institute of Strategic Studies and Analysis Sergei Demidenko: "Such statements are worthless, and are practically meaningless for the Sunnis. Note Sunni specificity where one or the other "theologian" may issue a fatwa, and another one immediately repudiate in presence of numerous Sufi differences. For example, on the grounds that the Koran does not require implementation of recommendations made by human beings that are still living.

In addition, no one is going to give anything up, especially the cooperation with China whose goods the most of the Islamic world uses. The issue is particularly acute for relatively poor countries that do not live at the expense of oil and gas.

The information regarding the impact of his words on the hearts and minds of Muslims is contradictory. It would seem that Qaradawi has proven his influence when at one time he achieved the liberation of civilian Europeans trapped in Iraq. For this act he received personal thanks of the French Foreign Minister Michel Barnier. In other words, he has some influence on the Sunni insurgents.

One thing is clear: the Shiites do not consider him an authority as he called them cultists and condemned for their actions in Bahrain. They have questions for the "fighter against Israel."  For example, they are wondering about his communication with one of the rabbinical groups in 2008. He then said: "The hostility between Muslims and Jews does not exist .... The Jews, who believe in the true Torah, are very close to the Muslims." In this regard, Iran's ayatollahs have characterized him as "a representative of the international Freemasonry." According to a number of Shiite theologians, Qaradawi works with a very definite purpose of splitting the Muslims "in favor of Western backers and their cronies among the Arabs."

One may think that such fatwas express well-defined commercial interests of Russian and Chinese competitors. However, Qaradawi seems to have a reliable alibi: on April 14, 2004 Qaradawi issued a fatwa to boycott goods of American and Israeli origin. However, much has changed since then, and the priorities of the prominent citizen of Qatar, important U.S. ally, could have changed.

However, this anti-American fatwa also showed very little impact of Qaradawi on the Sunni. At least, this has not led to a decrease in trade between the Arab Gulf countries and the USA. For example, neither Saudi Arabia nor Qatar abandoned this trade. Moreover, they increased the volume of the American arms purchased annually for astronomical amounts.

However, Qaradawi is not an absolute authority even for the radicals. The representatives of the Salafi movement have repeatedly blamed him for conflicting views and actions. He condemns terrorism, but then makes a reservation that the use of Palestinian 'human bombs' is not an act of terrorism. He displays a similar controversy with regard to female circumcision.

Qaradawi is famous with another fatwa issued by him against Gaddafi on February 21, 2011, in which he urged the soldiers to kill the Libyan colonel, and liberate Libya from him. But none of his subordinates used this "recommendation" at the time.

And even in his homeland, Egypt, his authority is very relative. For example, last year, he pointed to the need for co-religionists to end violence against Copts, who played a significant role in the overthrow of "the tyrant Mubarak." But, judging by the fact that violent attacks against Coptic minorities do not stop, not all Egyptians heard their influential countryman. Can we seriously believe that the Sunni Muslims will obey restless Qaradawi this time?