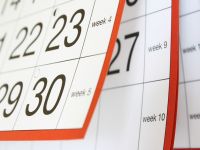 Scientists propose a fixed schedule, with an additional week 5 or 6 years

According to the proposal, holidays will always fall on the same day of the week, all year. The proposed new schedule would have to be accepted by governments around the world

An astrophysicist and an economist from the United States are starting to campaign this week for the international adoption of a fixed schedule, in which years are identical, and will include a weekly day of rest and an additional week every five or six years.

In this calendar, for example, if Christmas this year fell on a Sunday, it will also fall on the same day of the week in 2012, 2013 and so on. "The idea of ​​a fixed timetable has already been presented to the League of Nations," astrophysicist Richard Conn Henry, the Krieger School of Arts and Sciences at Johns Hopkins, said on Wednesday (28th).

The presentation took place in the 1920s and then, according to Henry, there was another attempt to convince the United Nations on the convenience of a calendar in which the holidays and birthdays fall forever on the same days each week.

"However, the two proposed calendars had a fatal flaw: they broke the cycle of seven days, with the weekly day of rest that is central to the religions," he said. "Our system divides the year into four quarters and 12 months, and no leap years, but the accumulated extra days for an additional week every five or six years," he added.

Henry said facing the task of promoting the idea of ​​this new calendar to the world's governments will be up to his collaborator, mainly economist Steve Hanke, of the Whiting School of Engineering. "Our plan is to provide a stable schedule that is absolutely identical from year to year which will allow permanent and rational planning of annual activities, from undergraduate school to vacations in jobs," Henry explained.

One of the advantages Henry and Hanke see on their calendar is the convenience of the holidays and birthdays falling on the same day of the week year after year. However, the economic benefits are even more profound, according to Hanke. "Our current calendar is full of anomalies that led to the establishment of a wide range of conventions that attempt to simplify the calculations of interest," he added.

"The new calendar has a predictable quarterly that employs 91 days, and this eliminates the need to account for the artificial count of days," he continued.

The Gregorian calendar, currently in use in much of the world, came into force in 1582 when Pope Gregory changed the calendar adopted by Julius Caesar in 46 BC. To synchronize Caesar's calendar with the seasons, a Gregorio team of experts took away 11 days in October, so that this year the 4th of October was followed by 15 days of the same month.

The adjustment was necessary to deal with the same problem that hinders the creation of a new practical and effective calendar: the fact that each year actually contains 365.2422 days.

This is the time it takes the Earth to complete one orbit around the sun, and to compensate for the fraction of day (0.2422), the Gregorian calendar adds one day every four years, called leap years.

"The current cacophony of time zones, schedule changes in the summer and winter calendar, and the calendar oscillations year after year disappear. The economy, in other words, we would all receive a dividend of permanent amortization," explained Henry.