Guantanamo is most expensive jail 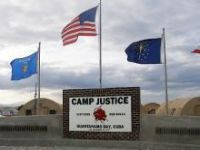 This establishment, managed by the U.S., spends $800,000 for each of the 171 detainees, many of them held in custody without charges.

Data published in the Spanish daily, El País, and assigned to the Department of Defense of the United States, establishes Guantanamo prison as the world's most expensive prison. The establishment, with 171 detainees in Cuba, are costing American taxpayers 137 million Euros (about 242 million dollars) per year, or 800,000 Euros each (1.4 million dollars). Meanwhile, the average spending per person in the prison system on American soil is 25,000 Euros (about 45,000 dollars) a year.

The Guantanamo prison, opened in 2002, months after the attacks of September 11, operates under the "logic of prevention." Inmates sent to the site do not necessarily need formal charges. They can be kept in custody indefinitely, as long as the U.S. would consider them a risk.

The result of this controversial premise was exposed by Wikileaks in May 2011, with the leak of 759 secret records of 779 prisoners who have been through the establishment. According to the documents, at least 150 detainees were innocent people, including elderly people with dementia, psychiatric patients and teachers.

In an interview, Michael Strauss especially lays bare French violations and mistakes made by the U.S. government at Guantanamo Bay. Michael Strauss, a professor of International Relations at the Centre d'Etudes et Stratégique Diplomatique of Paris, explained to CartaCapital at the time of the leaks, that the prison was designed to shift the crime of terrorism from civilian to military and detain prisoners outside the USA.

"This scheme has created several new legal, political and moral issues. For the Americans, it became even more difficult to deal with terrorism with international partners."

The documents showed that the most important aspects for the arrest of an individual were the amount of information known by the same and their degree of dangerousness in the future.

In prison, trying to escape the image of torture, the prisoners are checked every three minutes. The most dangerous, such as the alleged mastermind of the ideological attacks on Washington and New York in 2001, Khaled Sheikh Mohammed, are monitored every 30 seconds. In addition, 1,300 local people work among soldiers, interpreters, cooks and psychiatrists.

The Guantanamo detainees captured in 2008 alone have the right to habeas corpus under the U.S. Constitution. "This decision came only after several inmates spent six years detained without being charged with crimes, and after torture," said Strauss. "The Court ruled that prisoners enjoy these rights, because the United States has a sort of de facto sovereignty in Guantanamo. Even if, officially, in fact, Cuba has sovereignty."

The teacher pointed out the ambiguity of sovereignty as the main reason for the choice of prison, because it allows the special peculiar treatment of prisoners. "Where the Americans are, their sovereign legal system applies completely. And where they have jurisdiction, but are not sovereign, its legal system applies only partially. Thus, constitutional protections such as habeas corpus did not apply there," he explains.

According to El País, about 20% of the detainees were arrested arbitrarily even according to military law. Moreover, the U.S. did not believe in the guilt of 60% of the prisoners.

President Barack Obama said he was making closing Guantanamo one of his main goals during the elections. In January 2009, the White House stipulated that in a period of one year the prison would be closed, but failed to stick to it.

"The recession would have a direct impact on a much larger number of people in the United States than anything that Washington did with respect to Guantanamo," said Strauss. He says the economic crisis was one of the reasons Obama disregarded the promise.