IMF very sad of losing Russia as its prey 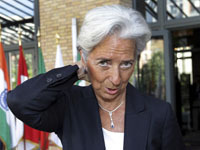 According to her, public spending was not a very healthy phenomenon, especially before the elections. However, it is clear that Lagarde was not talking about the spending connected with the elections only. The IMF's chairwoman does not like the payments to weakly protected layers of the population, the increase of spending on defense and law-enforcement bodies. Aside from that, Christine Lagarde is concerned about the fundamental reorganization of Russia's entire road infrastructure.

Before the Managing Director of the International Fund released her statements, President Medvedev signed the law about raising monetary allowances to military men by 2.5 or 3 times. The law also raised military pensions by 1.5-1.7 times.

Prime Minister Vladimir Putin stated earlier that the government would delay the increase of tariffs of natural monopolies, except for RZD (Russian Railways). The tariff increase has thus been postponed from January till July 2012. He also said that the tariffs on electricity would be indexed on the level of the inflation rate. The governmental committee for budget projects later decided that the tariffs of natural monopolies would be raised not higher than the inflation rate - by 6 percent in 2012 that is. Tariffs on natural gas became an exception: the prices on this fuel will grow by 15 percent from July 2012.

In addition, Putin said on November 8 that the Russian government was intended to double the volume of transport construction in ten years. As many as 8 trillion rubles will be assigned for the purpose before 2020, Putin said.

It is an open secret that the intentions of the Russian administration to invest in the development of the country, its social sphere, the transport infrastructure and the defense power has traditionally evoked rejection among such international monetary centers as the IMF.

Last year, the IMF addressed to the Russian government with a whole list of recipes. The recipes looked like those the Fund gave Russia during the 1990s.  Those recipes became mandatory instructions for the governments of Gaidar and Chernomyrdin.

The set of recipes was standard. It included privatization (natural monopolies inclusive), the minimization and even liquidation of public spending on social purposes. It also included cuts of the funding of the armed forces and other state bodies, including law-enforcement agencies. In return, Russia received modest handouts from the IMF to buy food from Western countries, to liquidate defense enterprises, to destroy coal mines, etc. The recipes from the IMF took Russia to the default in 1998, which automatically ended the "fruitful cooperation" with the fund.

Strange as it may seem, Russia began to recover after that. The IMF could not be happy with that, of course. The Fund became concerned with Russia stepping aside from the "basic principles." IMF officials started saying that Russia had no strategy to scrap the measures taken to support the economy.

To put it otherwise, supporting the national economy is not a correct thing to do from the IMF's point of view. In addition, the fund recommended Russia should intensify the reforms in the field of state funding.

The reforms imply an opportunity to considerably decrease state spending in the field of healthcare and social maintenance. According to IMF's experts, the pension system of Russia will not be viable without those reforms, which particularly include the gradual increase of the retirement age (pensions for the dead, so to speak).

Christine Lagarde said during her visit to Moscow that Russia would rather need to recreate its reserves instead of investing in expensive projects while oil prices remain on a high level. It goes about the replenishment of the Reserve Fund and the National Welfare Fund.