Dollar and euro: Whose crisis is bigger? 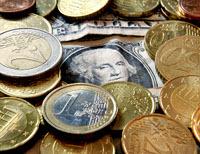 Dollar exchange rate continues to rise, despite the enormous national debt and virtually pre-default state of the USA. Why?  Mikhail Fedorov, analyst of "RIC-Finance":  "Today, because of the debt crisis the Eurozone and the U.S.  became competitors in terms of their attractiveness to outside investment, and therefore their ability to fund their own public loans. In fact, they are competitors in terms of attracting investment. The world today simply does not have enough funds to finance both the euro area and the U.S. simultaneously. The flow of investments in one region will pump blood from another one. This creates a conflict of interests between the two largest economies in the world. Of course, we are not talking about an economic war (perhaps not yet), but the presence of the opposing sides, in my opinion, suggests that the laws of war are relevant.

There is a saying: the best defense is an attack. In a battle, the winner is the one who has the initiative and does not lose it. In order not to lose momentum, you should always perform action. No need to run and plug holes with anything. The situation should be monitored, and you should prevent it from controlling you. In this respect Europe is losing on all fronts, and the U.S., by contrast, shows the superiority. However, Europe as a whole looks better than the U.S. if we look at the numbers only. Yet, in a war troop levels and simple math do not work. The winner is not the one who has the best tanks and more troops (that is, not the one with less total debt and lower budget deficit. In the euro area total debt and budget deficit is much smaller than in the U.S.), but the one who has better command and control, the one who has the strategy as the main element. A well-known strategist Carl von Clausewitz:

"The strategy is using the battle for the war, therefore, it should give the military action the goal that would correspond to the meaning of the war. ... A monarch or military leader who knows how to direct a war he is leading in strict accordance with his objectives and means, and who is doing not too much, not too little, provides the best proof of his genius. But the influence of the genius effect is not so much in the newly found design steps that immediately catch the eye, but in the final happy outcome of a business."

Europe is like a powder keg: Greece yesterday, Italy today, and again, Greece. In the meantime, there was Spain. But these are separate instances without a common strategy. Europeans do not have it because there is no unity of command and consistency. In the U.S., by contrast, is not the case, the authorities have their fingers on the pulse and conduct the ongoing processes, not allowing the particulars take the initiative. Therefore, even if Europe manages to "plug" another hole, there will be a new one. Accordingly, the U.S. has a better chance of winning the competition for cash flow.

If you look at it from this perspective, the dollar at the moment seems preferable to the euro, and in the medium term, the euro exchange rate will only decline. Even though the dollar is now much more expensive than the euro, mathematically the dollar should be worth much less. Much more important than any mathematics is the fact that with this administration, the worst case scenario with the defaults of some European countries and the collapse of the euro area in general is not ruled out.