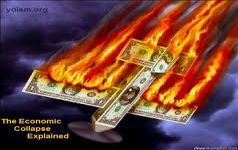 Quite recently a forecast from the International Monetary Agency came as a shocker to many in the financial world. Was it a forecast or was it a plain statement to the readers or the audience everywhere? It was clear to see it was a statement that carried no double meaning, but that USA will no longer be the economic super-power,

As of the year 2016, it will step down to the 2nd spot. Will it step-down graciously and give up the much coveted role it has garnered since the end or World War II? It is doubtful with the current turmoil it has created in Libya!

With its dominance over this long period has come many controversies. The Soviet Union dissolved much to the chagrin of many a developing country. The west, especially the old colonial masters, were delighted by the seeming decapitation of a cold war enemy. Or at least so they thought.

The western powers with their military arm NATO, led by the US, has had free run since then. They coerce the UN's Security Council to pass a convenient declaration and presto comes the excuse to bombard the life out of an adversary, be it Iraq or now Libya.

The major media, mostly owned by large corporates in sync with establishment that caters to a military industrial complex, went Oo-la-la over the prospect of an invasion under some pretext or other. Why? After carnage by bombardment would come the juicy treat of rebuilding a nation that would earn their coffers huge pay offs!

Anyway, this has been the story so far. But if the statement by the IMF is true, what will the world hold forth then? IMF itself is considered to be a tool of the US establishment that dictates financial policies to much of world that depends on US aid.

IMF by the way has a huge clout in the international financial set-up along with the World Bank which by the way is a group of private banks mostly based in the US, UK & Europe , considered to be another stooge of the US administration.

Now the irony may have been side-lined here. IMF being the tool of American financial policies towards the so-called backward nations, has called its tool master sick!. Why so because of the foreign debt the US has accumulated, that has run into trillions of dollars is weakening the infrastructure of a dying behemoth.

Adding to this woe is the massive foreign trade imbalance especially with China. The huge debt burden sitting on its shoulder is becoming unbearable to Uncle Sam.

Then there is the economic clout of a fast growing group of BRICS countries comprising of Brazil, Russia, India, China and South Africa, whose combined economic power will overshadow the G7's or the industrialized west's output combined. Rapidly growing economies they are, however lop-sided it is in a few countries of this group, being a different subject!.

Add to the economic might the military strength that China at least is not afraid to display. It is getting stronger says my neighbour who follows reports from newspaper articles. Russia is regaining momentum and is on the upswing especially under Putin and to a part under Medvedev. India on the other hand is growing economically and militarily, but remains a pacifist nation, always exposing its other cheek to be slapped and slapped again! So the race is on! Brazil and South Africa have already attained the position of regional powers in their respective hemispheres.

The BRICS as a block or an entity is currently concentrating on economic co-operation between themselves, however, they may divert their agenda towards a military one on the lines of NATO. Will that be geo-politically feasible? One has to watch for the hidden moves!

Coming to a different aspect of this development is the issue of International Reserve Currency (IRC). Currently, the US Dollar is the IRC and there are already feelers going on about changing this to a more economically friendly and sustainable currency. The jitters have begun to bug the finance gurus about the impending doom of the once almighty US Dollar! A new standard or a neutral currency to conduct day-to-day trade across the waters is the call! This has led to many nations dumping the US Dollar and they are on a gold hoarding drive.

This is all thanks to the insurmountable debt the US has accumulated over the years and the lies perpetrated to its own people by the Feds in collusion with political big-wigs which is rather inexcusable. In other words, greed and mismanagement became the cause, a cause which always was in the fine print!

If the prophecy of the IMF is true, an entire gamut of ground realities is bound for a change. First, the IMF and the World Bank may cease to exist or come up with a new benign avatar. Second, with their economic clout almost gone, the imperialistic tendencies of past colonialists and neo-colonialist powers will be drastically altered for eternity. Third, some economic and social justice may finally prevail in the dust-bowls of hunger and malnutrition long ignored by the few greedy but very powerful entities.

Finally this forecast certainly is not a doomsday forecast for the world to end but simply a forecast or a statement of the shape of things to come. But the imminent downfall of a major economic power could cause a major effect in the now globalised economy.

Recovery from this shock will take time, unless the clever and intelligentsia from the world over prepare themselves in advance for this impending and inevitable change!

So the new shape that is seen on the very distant horizon may become a reality on the day after 2015! The current oligarchies and plutocracies which rule our planet with a package of greed, cruelty, despotism, lies, dominance etc. may finally sink underground, at least if not fully but a few inches. That shall be a good enough change for better things to come for the many oppressed peoples of this world.