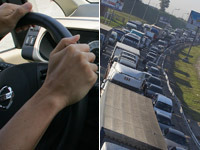 Moscow has been ranked eighth on the list of cities with worst traffic jams. At the same time, experts believe that traffic jam in the Russian capital are the longest in terms of duration. An average jam in Moscow lasts for 2.5 hours. Brazil's Sao Paolo is the leader when it comes to the world's longest jams in terms of distance. Brazilian traffic jams may stretch up to 265 kilometers.

Sao Paolo has been placed on top of the above-mentioned list. The city with the 13.6-million strong population has the transport infrastructure on the level of the 1960s.

The second place on the list is taken by China's Beijing. The Chinese capital is suffocating from the car boom. The city is overpopulated: the number of permanent and temporal residents of Beijing, including the migrating population, totals nearly 30 million. The city can hardly cope with so many people. A 100-kilometer long traffic jam appeared in China last year. It took the jam ten days to disappear.

Brussels is the third on the list. The population of Brussels and its suburbs is not that large - approximately 1.1 million - but the number of cars per capita in the city is too high. Experts say that traffic jams in Brussels mostly occur because of the architectural structure of the ancient city. Drivers in Brussels waste 65 hours a year on average.

The residents of Paris and its suburbs waste a little more of their life - 70 hours a year. Paris is ranked 4th on the list. The French capital is a tourist Mecca in Europe. The main reason of traffic jams in the city of dreams is tourists. As many as 300,000 tourists come to Paris every day. The majority of them come to the city driving their own cars, which is a common trend in Europe.

One of Europe's most overpopulated cities - Warsaw, comes next on the list. Two million residents of the Polish capital complain of traffic jams constantly.

Mexico with its 20-million-strong population, the city which is known for its dirty air, comes sixth. The Mexican capital is also known for a very speedy growth of its population.

In USA's Los Angeles, drivers waste as many as 515 million hours in total every year. There are no rush hours in LA - there is one big rush hour in the city every day. As many as 670 million liters of fuel is wasted in the streets of LA every year.

Moscow takes the eighth place on the list of longest traffic jams. Muscovites spend the average of 2.5 hours in traffic jams daily.

Moscow is followed by the British capital, London - the city that is loved so much by Russian oligarchs. British drivers spend 54 hours a day in traffic jams. It is worthy of note that the London authorities are struggling against traffic jams in the city center very effectively. The access to the central part of London is restricted for motor transport.

The list of jams closes with India's New Delhi. Those who have been to India may easily understand the reasons behind traffic jams in Indian cities. Plenty of rickshaw men, no driving discipline, and, of course, cows that wander wherever they want to.

Is there a way to struggle with traffic jams? Nobody knows the answer to this question. It seems that "walk, don't drive" is the only way to solve the problem.