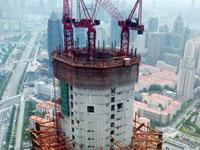 In 2011, China is to build 200 skyscrapers. The homeland of high-rise buildings - the United States of America - has 200 skyscrapers today. For the time being, the quantity of such buildings in China and in the States is identical. However, during the upcoming three years, China will take advantage of its overseas competitor. A new skyscraper will be appearing in China every five days.

Motiancity.com website made the list of Chinese cities where the number of skyscrapers is the largest. Hong Kong comes first on the list with 58 towers. Shanghai has 51, Shenzhen - 46. A half of world's ten tallest buildings is located in China and Taiwan. The world's second tallest tower is in Taipei, the third - in Shanghai, the fourth - in Hong Kong, the seventh - in Nanjing. The ninth tallest building is located in Guangzhou, straitstimes.com website reports with reference to Dongfang Daily.

The Chinese do not harbor plans to beat the record of Burj Khalifa, the world's tallest tower ever built. However, by 2015, China may become the home to the world's second and third tallest towers. The Shanghai Tower, the construction of which has not been completed yet, is expected to reach the height of 632 meters. The Greenland Center in Wuhan is to be 606 meters high.

China needs so many skyscrapers to meet the demand in residential and office property for millions of local citizens. The nation is expecting an influx of residents from rural areas to cities during the upcoming decades. There is also another reason for such ambitious plans: China intends to improve the prestige of smaller cities by building high-rise buildings there, The Telegraph wrote.

Skyscrapers appear in Chinese cities even if there is no demand on such buildings there. A typical example is the city of Fangchenggang, which plans to build a skyscraper 528 meters tall. The building is to be higher than the Shanghai World Financial Center - the world's third tallest building. The fact that there is less than a million people living in Fangchenggang does not confuse the authorities.