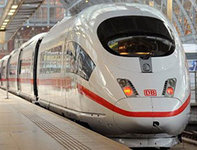 JSC Russian Railways (RZD), Siemens AG and JSC Sinara Group signed an agreement about fundamental conditions of the delivery of 1,200 carriages of Desiro Rus (Lastochka) electric trains. The agreement also covers the localization of production of the trains which are going to be used to transport passengers during the Olympic Games in Russia's Sochi. The contract is evaluated at 2 billion euros.

Siemens AG will deliver 54 Lastochka trains to RZD. The contract for the delivery of 38 electric trains was signed on December 17, 2009. Sixteen more trains were ordered on September 21, 2010. The cost of the delivery contract made up as much as 580 million euros.

Last year, a package of preliminary documents was signed to establish a joint venture between Siemens and Sinara Group to produce the electric trains. RZD also ordered 240 five-car trainsets in 2014-2020.

In accordance with the signed document, electric trains will be produced at Russia's Ural Locomotives enterprise. Initially, the joint venture is to produce 16 from 54 trains, which RZD ordered with Siemens in 2009.

By 2017, the localization level is supposed to make up 80 percent. Thus, the trains will be assembled in Russia to be adapted to exploitation conditions in the country.

The partners have agreed to establish a specialized engineering center to develop and modernize multiple-unit trains that will let RZD or other carriers order introduction of changes in the basic construction and configuration of the localized electric trains.

The basic price for a five-car electric train will make up 8.6 million euro, which is 20 percent as less than the trains delivered under existent contracts signed by RZD and Siemens AG. Other delivery conditions will be finally coordinated by the sides during subsequent negotiations.

Desiro Rus trains will be used on the railways of Russia by passenger carriers on suburban and combined routes. The first batch of the German assembly will be relocated to Moscow after the Olympic Games in Sochi end. In Moscow, the trains will be used for express transfers between Moscow's railway stations and airports. Desiro Rus trains will also replace the commuter trains used for express transfers between Moscow and nearest regional centers.

A Desiro Rus train is designed for suburban passenger transportation on the railways of the Russian Federation. The trains develop the speed of up to 160 km/h. Each train will be equipped with video surveillance systems both inside and outside the cars.

There was another contract signed in Sochi. The contract is about the production and delivery to RZD of 200 freight electric locomotives produced by Transmashholding (2EC5). The company runs this project in cooperation with France's Alstom. 2EC5 locomotives will be produced at the locomotive-building factory in Novocherkassk. The contract is evaluated at 1 billion euros, the chairman of the board of directors of Transmashholding, Andrei Bokarev said.

JSC Russian Railways, which has over 20,000 locomotives, gradually modernizes the outdated fleet. In 2010, the monopoly purchased 393 locomotives in the total sum of over 27.9 billion rubles.