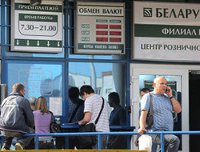 The government of Belarus applied to the International Monetary Fund for a stabilization loan. The work of the IMF mission will last during June 1-14. Belarus is not ready either for large-scale liberalization in the currency sphere, or for a considerable reduction of state spending.

Those were the requirements, which the IMF previously set forth as a condition to give a loan to Belarus. The National Bank of Belarus raised the refinancing rate by tow percentage points - up to 16% per annum. The bank has thus met one of the requirements of the international financial organization.

Nevertheless, the refinancing rate has been raised for the fourth time since the beginning of the year. The Belarusian ruble lost 56 percent of its value on May 24.

The IMF also wants the country to privatize large state-run enterprises and cut the budget support for agriculture. These are macroeconomic issues, and Minsk is not likely to be that agreeable here.

Minsk raised loans from the IMF in 2009-2010. Belarus received five tranches totaling $3.46 billion. The program was completed in March of 2010, when Belarus received the last tranche of $670 million. It is worthy of note that the growth of the Belarusian GDP dropped to 0.2 percent in 2009.

"The talks about the adequate program of actions between the government and the National Bank of Belarus will be conducted within the scope of the IMF mission, the work of which will start in Belarus on June 1, 2011," the message also said.

Russia is ready to assign $3 billion from the fund of the Eurasian Economic Community, Russia's Finance Minister Aleksei Kudrin said. The assets will be transferred to Belarus during three years. Minsk is going to receive another $3 billion as a result of privatization of state property.