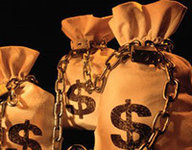 Swiss banks may no longer be a reliable storage for the funds the origin of which is questionable. The Swiss authorities have recently opened secret bank accounts of former presidents of Egypt and Tunisia - Hosni Mubarak and Zine El Abidine Ben Ali, as well as of Libya's Gaddafi.

According to Swiss authorities, the county has frozen the accounts worth $954 million in total. As many as $415 million belong to Gaddafi, $470 million - to Mubarak and $69 million - to Ben Ali.

The law, which allows to conduct such operations with foreign accounts, is known as the Duvalier law (after Haiti's former dictator Jean-Claude Duvalier). It is a new law that came into effect on February 1. The law is based on the experience with accounts of General Sanni Abacha, who stole millions and millions of dollars from the people of Nigeria. It was decided to invest the funds from the general's accounts into the agrarian reform in the African country. However, ten percent of the amount disappeared without a trace. This time, Switzerland will control the spending.

It not ruled out, though, that the above-mentioned amounts are only a tip of the iceberg. According to the Swiss National Bank, Hosni Mubarak's accounts are worth $4 billion. Independent experts say that Swiss credit institutions may store over 150 billion US dollars, the origin of which is questionable.

Ivan Rodionov, a professor of the Supreme School of Economics, told Pravda.Ru that such practice exits for 15 years already or even longer.

"There is nothing extraordinary about it. North Africa has been the center of world attention for months. That is why people are showing increased interest in everything that touches upon the region. The things that Switzerland is going to do will be very good for the economies of those countries. It will also teach others a lesson. As for the procedure to wire the funds, Switzerland will have to discuss the details with new administrations. It also means that anyone who owns large amounts of money may lose it all in an instant. It is extremely difficult to prove the pure nature for hundreds of millions or billions of dollars," the expert said.

Expert Nikita Zagladin believes that the decision of the Swiss authorities to deliver the funds of Ben Ali, Mubarak and Gaddafi to the people of those countries creates an adequate precedent.

"There were such incidents before, but it was going about the arrest of accounts over financial crimes committees by the holders of those accounts. It was mostly done upon the request from the USA or the International Criminal Court. This time, it goes about something different. First and foremost, it goes about prominent politicians. Gaddafi has not been toppled, but his name is on the list along with the toppled presidents. In other words, it means that they can take away the money from a sitting head of state. To take the money away, one does not have to prove that the money was stolen. The Swiss authorities may simply decide that depositor's evidence is not sufficient enough to provide a clear picture about the origin of the money.

"There are many various offshore zones and "safe harbors" on the planet. However, smart people need to realize that there is a storm in the quietest and safest harbor - Switzerland. It means that they have absolutely no guarantees to save the money that they export," the expert said.