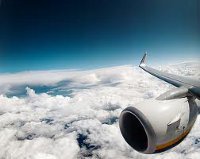 Russia's largest airlines Aeroflot and Transaero made a decision to raise fuel surcharges by the amount of 40 to 80 currency units starting June 1, 2011. Tourist operators have already received official notification in this regard. Experts attribute the rise in prices to the increase of jet fuel price and expect a reduction of the volume of Russian air transportation.

In the near future the airfares may increase by 1.5-5 thousand rubles, Vesti.ru reports. The largest Russian companies Transaero and Aeroflot have notified their partners about the upcoming price increases. Experts of the Association of Tour Operators of Russia noted that "the cost of jet fuel has increased by 35%, fuel surcharge will be increased from June 1 by 40-80 currency units per person, depending on the destination (in the calculations tour operators use currency units - dollars or Euros, depending on the country of destination, plus an average of 2% to the Central Bank rate). According to the newspaper "Izvestia", the company Tez Tour and Vand International confirmed receipt of the letter.

Communications Director of Transaero Sergei Byhalo explained that the tickets that are sold at the box office will not be affected by the increase, as the increase will only affect the internal relationships between tour operators. The increase in the price of tickets, he said, is due to the fact that since November of last year fuel prices have increased by 25% and continue to grow, while the profitability margin of civil aviation is 2-3%.

The remaining carriers have not yet made a decision in this situation. The leadership of "Russia" airline cannot say whether they will do it or not."UTair" at the same time announced its readiness to reduce fuel surcharges as soon as the pricee of jet fuel goes down. ATOR analysts believe that the fees will rise for the most popular destinations in Europe and Turkey with an average length of flight of 3-4 hours. This is not a whim of the players of the aviation industry buy an objectively grounded process. Recently, the price of jet fuel at the Moscow aviation hub actually rose by approximately 25-30%, while the average world market price of kerosene increased from $770 per ton to $1,100.

This price increase, according to "Vesti.ru," may lead to the decrease of air traffic volume. Previously, based on the projected growth of the Russian economy in 2011, the air traffic was expected to increase in volume by 12-15%. In the first quarter, it increased by 10%. In recent years, domestic air carriers have already taken steps to reduce fuel costs, for example, by buying modern, more efficient planes, reducing the expense of fuel consumption by a quarter. In the future, the reduction of taxes on products of the refiners will be considered as well as an increase of the competition between them on the ground and return to the discussion of the Economic Development Ministry about the introduction of zero VAT on domestic flights.

At the moment, prices for air travel in Russia already can be compared with the prices of the European carriers. In comparison with 2002, the cost of a two-hour trip for passengers has dropped today from $400 to $230. Additionally, during the crisis, Russian airlines have been forced to lower the ticket prices by approximately 20%. Thus, the current rise in prices is inevitable. Head of Press Service of Transaero Airlines Sergei Byhalo in this regard stressed that "in the fall of last year due to a spike in the price of aviation kerosene Transaero was forced to raise prices on airline tickets. However, later, due to the intervention of the government leadership fuel suppliers have lowered their prices. Our company has also reduced prices for tickets. In the current situation we can only rely on rising prices and consumers' ability to pay."

According to the first vice-president of the Association of Tour Operators of Russia Vladimir Kantorovich, now the price of tickets for popular destinations amounts to approximately half of the cost of the tour. "If fuel prices rise by 20%, then the price of the tour will rise by 10%," said a representative of ATOR. Only those who bought tours in advance will manage to avoid a significant rise in prices for airline tickets.