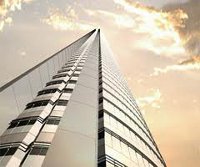 Saudi Arabia is planning another world's tallest building project. The new tallest building - Kingdom Tower - is expected to be 1,600 meters high. Kingdom Tower (to be built in Jeddah) will be taller than Nakheel Tower in Dubai (1,400 meters). The latter is a project of Australia's Woods Bago, although the construction of Nakheel Tower has been suspended, reports with reference to website.

Investments in the construction of the tower may reach up to $30 billion, the website said.

The world's current tallest building is also located in Dubai. This is the world-known Burj Khalifa tower, which is 800 meters high. The spire of the tower can be seen from the distance of 95 kilometers.

It will take a visitor 12 minutes to travel to the top story of Kingdom Tower. It is also planned to build a town around the building. The town will take 23 square kilometers of land; it will become home for 80,000 people.

The Kingdom Tower project was designed by architect Adrian Smith, USA. Smith was also working on the Burj Khalifa project.

Kingdom Tower will have conference halls and retail facilities at the top besides a five-star hotel, offices and deluxe residential units. In May 2008, after soil testing in the area cast doubt over whether the proposed location could support a skyscraper of significant height, MEED reported that the project has been scaled back, making it "up to 500 meters shorter".

Reports in 2009 suggested that the project had been put on hold due to the global economic crisis and that Bechtel was "in the process of ending its involvement with the project". Kingdom Holdings Company quickly criticised the news reports, insisting that the project has not been shelved.