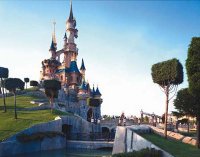 The Moscow government is interested in searching for investors for building a Russian Disneyland in the city, the chairman of the Department for Foreign Economic and International Affairs, Sergei Cheremin told news agency.

"This is a timely subject for Moscow today - to build modern entertainment areas for families, where people could come for entertainment. It would be good, of course, if Moscow had something like Disneyland, where people - both adults and children - could spend a whole day. We conduct negotiations with companies interested in the realization of this ambitious project," the official said.

If Moscow finds investors for building such a theme park, the project will have to be modernized to comply with peculiarities of the Russian climate.

"If we have cold weather in December, for instance, with temperatures falling down to 30 degrees below zero Centigrade, nobody will dare to ride any roller coasters, of course. All of these details, as well as many others, have to be taken into consideration," the official said.

According to Cheremin, the Moscow authorities are already in talks with several banks and financial foundations regarding the project. The project requires the creation of a serious international consortium," the official said.

"We conducted negotiations with a number of large European construction companies that already have this experience. Russian investors evince great interest in the project as well," Cheremin said.

The Russian Disneyland, if ever built, will not be located anywhere inside the city.

"This has to be the object located somewhere near the ring road, or anywhere else, where it is possible to provide up to 100 or more hectares of land," he said.

The Moscow government is very interested in the project. "We would very much like to have an object like this in the city so that it would attract both Muscovites and citizens of other countries too. There is no park like that anywhere on the territory of the CIS. If it appears, it will stimulate tourist exchange, and tourism is a direct foreign economic activity," Cheremin concluded.