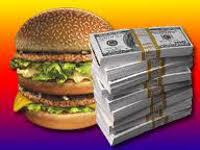 The network of McDonald's restaurants is no longer the world's largest. The leadership now belongs to Subway fast food chain. Nine years ago, Subway took advantage of McDonald's on the number of restaurants in the United States. However, McDonald's leaves the competitor behind from the point of view of global reach and profit.

In Russia, there were 169 Subway restaurants as of the end of 2010, although there were 82 restaurants in the beginning of the year. At present moment, there are 182 cafes of the network in Russia, and the company plans to increase the number of 325 restaurants. Thus, the competition of fast food chains in Russia has been growing too. As for McDonald's, there were 270 restaurants of the chain in Russia as of December 30, 2010.

Subway opened its first restaurant in 1965 in Connecticut. Subway traditionally opens its outlets in unusual locations, which is a marketing feature of the company. For example, the company has a restaurant in an automotive showroom in California, in a household store in Brazil, at a ferry boat station in Seattle, on board a river vessel in Germany, in a zoo of Taiwan, at Goodwill store in South Carolina, at secondary school in Detroit and even at a church in Buffalo, New York.

In addition, there are approximately 900 Subway restaurants at Wal-Mart stores, some 200 others are "deployed" on army bases, including bases in Iraq and Afghanistan. Three restaurants operate on the territory of the Pentagon. The principle of the chain is to be as close to customers as possible.

The chain began to enter the international market in an unusual manner. The first restaurant was opened in the Middle East, in Bahrain, in 1984.

Most of Subway's income is formed in the United States - $10.5 billion from the overall annual income of $15.2 billion. By 2020, the company plans to even the number of outlets in the USA and abroad.

Fast food chains currently conduct fierce struggle for developing markets, presumably Asian ones, since their share in the income of companies has been growing steadily. Subway has already launched 1,000 restaurants in Asia and the first cafe in Vietnam. In China, there are 199 restaurants operating under franchise.

The capacity of this market is enormous. By 2015, the company plans to open over 1,500 restaurants in China. In addition, Subway is opening outlets in Pakistan, Singapore, South Korea, Thailand, Taiwan, Philippines and Malaysia.

McDonald's takes advantage over Subway on the number of countries - 117 vs. Subway's 95. McDonald's also received a higher profit as a result of the last financial year and reached $24 billion.

Politics
Putin reminds the world who saved the globe from Nazism