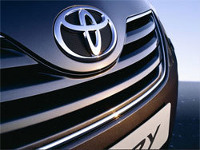 The year 2010 became the year of never-ending trouble for Toyota. The world-known car maker recalled over 8.5 million cars internationally. Toyota's CEO Akio Toyoda presented his official apologies at the US Congress, the company paid a considerably fine, but the reputation of the Japanese corporation has been considerably damaged anyway. It just so happened that the international community did not notice the official statement saying that Toyota had nothing to do with the trouble that it had to go through.

On February 24, 2010, Akio Toyoda presented his apologies for brake problems with Toyota vehicles at the US Congress. Mr. Toyoda promised to do everything possible not to let such a mishap repeat in the future. Toyota recalled over 8.5 million cars globally because of the problems with brakes. America's sanctions were classic for such cases. The Japanese had to recall their cars and pay $50 million of compensation to the US government, Vesti FM reports.

It goes without saying that the American authorities took measures to compensate the damage a lot earlier than the final conclusions were made. Toyota's reputation suffered a very serious blow as a result of the claims. The sales of the company dropped, whereas the Americans supported their producers at other people's expense, as usual. Toyota's sales in the United States dropped by 11 percent.

The National Highway Traffic Safety Administration stated in the summer of 2010 that it was the human factor that played the tragic role in the car accidents. According to The Wall Street Journal, researchers analyzed over 3,000 cases of sudden unintended acceleration that occurred to Toyota vehicles. As it turned out, all of the accelerations occurred over the fault of the drivers. The analysis of the data received from 75 car accidents that entailed lethal outcomes because of the brake problems showed that the drivers were pressing the gas pedal instead of the brake.

The only incident, when brakes were blamed for the death of Highway Patrol Officer and his family, occurred to Lexus ES 350. However, the tragedy took place because of the all-weather mats, not the pedal. As a result, Toyota had to recall the mats as well - 3.8 million items.

In 2010, Toyota's shares dropped by several points. GM took the second place on sales (8.39 million cars) after the troubled Japanese corporation. Afterwards, it was said that the crisis ended, and Ray LaHood, the US Secretary of Transportation, officially stated that there was no electronic-based cause for unintended high-speed acceleration in Toyotas.

Better late than never. The conclusions from the committee did not cancel the fines for the company over the untimely notification of the authorities about the acceleration pedal defect. Toyota was fined $32.4 million.

A source at the US Transportation Department said that the fines, which the Japanese company would have to pay the Americans, would reach nearly $50 million. Toyota has already paid $16.4 million to the US government, but it was specified that the company had not broken the law and agreed to pay the fine to avoid lengthy court legal proceedings and disputes.

In addition, the US Transportation Department said in May 2010 that it would investigate how fast Toyota responded to the defects in its vehicles. The financial sanctions were supposedly based on the fact that the company was aware of the problems back in September 2009, but notified the authorities about the problem only four months later.

The support of domestic car makers in the United States may take evil forms at times.