AGAINST THE EXTENSION OF THE EU-MOROCCO FISHERIES AGREEMENTS 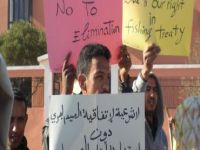 Activists from various pro-Saharawi groups just completed an action-occupation of the headquarters of the European Commission located in the Po. de la Castellana in Madrid, to protest the inclusion of the waters of Western Sahara (occupied by Morocco) in the fisheries agreements between the EU and Morocco.

The European Commission aims to get the green light from the European Council to negotiate a one-year extension of the fisheries agreements concluded with Morocco. Agreements, paradoxically, end on February 27, the date commemorating the creation of the Sahrawi Arab Democratic Republic.

At this Council, countries like Spain, France, Portugal, Latvia and Lithuania are positioned for an automatic extension. Other cases, such as Germany, Greece, Ireland, Italy or Romania are undecided in their positions, while Suacia, Britain, Denmark or Finland are clearly against these fisheries agreements including the waters belonging to the former Spanish colony, based on the multiple resolutions on the exploitation of natural resources on non-self governing territories the UN has passed.

The pro-Sahrawi movement of the Spanish State is aware of the potential economic impact to the fishing fleet which could lead to such exclusion. But neither will we tolerate or allow commercial or economic considerations, along with the classic and already well known blackmail by the Kingdom of Morocco, to take precedence over considerations of respect for international law and human rights advocacy.

Rights that are routinely violated for 35 years in the occupied territories of Western Sahara, and have intensified in recent months, increasing the Moroccan repression against what perhaps was the first uprisings of freedom and justice demands that now runs through the Maghreb and the Arab world including Camp Gdeim Izik.

For all this, and while the dictatorial Alawite monarchy does not hesitate to violate UN resolutions and international courts, plundering the resources that rightfully belong to the Saharawi with the acquiescence and complicity of the countries of the European Union, the Collective undersigned shall continue to protest actions against the Spanish Government, the party that supports it (PSOE) and EU bodies.