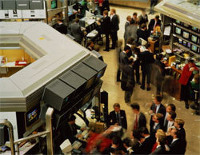 Terrorist attack in Domodedovo has taken the lives of 35 people and has once again demonstrated the vulnerability of Russia's position in terms of ensuring the safety of its nationals and foreigners. The explosion at the airport on January 24 could cost the country more than it seems at first glance. The investment climate of January 2011 has been completely damaged.

In connection with the terrorist attacks, Western experts have already declared that the influence of Prime Minister Vladimir Putin, who puts the security of Russia ahead of everything else, will strengthen. Because of the tragic events of Monday, Russian President Dmitry Medvedev was forced to postpone his trip to the Economic Forum in Davos, which has significantly damaged the investment image of Russia. But most importantly, the fact that foreigners were killed in the attack dramatically brings down the position of Russia in the eyes of European and U.S. investors. This will obviously affect the state of the stock market.

Despite the fact that trading opened in the green zone on Tuesday, the Russian stock market may expect hard times. According to Fincake, until the end of the month the market expects growth in the range of 1-2%. The main reason for the correction is the explosion at Domodedovo, and it is difficult to speak about continued growth that was observed during this month. Head of Analytical Services IC ITinvest Prospect Alexander Potavin believes that the sale of shares on the fact of the explosion at the international airport Domodedovo is unlikely to be replaced by the return of buyers to an active market.

According to him, "sadly, but investors have become accustomed to the fact that this type of tragedy has become the norm for modern Russia. For them, the situations in the oil market, in foreign markets, as well as charts of indices are more important. According to the results of the day, it became clear that the Russian stock indexes were trading in the zone of a slight decline. "Despite the fact that by 4pm the MICEX index went into a small plus (1723 points), the trading day cannot be called simple, because even though there was another drop in oil prices (Brent $95.1 / bbl; -1.54%) and uncertain dynamics at the European exchanges (FTSE -0,4%) in the afternoon we did not see the continuation of the morning trend in terms of sales on our stock exchanges," the expert said.

Analyst of Investkafe Alexander Lozovaya noted that yesterday shares of major airlines - Aeroflot and UTair - reacted to the tragic events that occurred on January 24, 2011 at Domodedovo airport with a short-term decline, which was restored by the end of the trading session. This is due to the fact that the home airport of Aeroflot is Sheremetyevo and Vnukovo is the home airport for UTair. Domodedovo airport is the home of Transaero company. From 16:37PM MSK (when the explosion occurred) until 17:35PM MSK (when the airport reopened to receive incoming international flights) the landing of four flights was canceled, followed by a cancellation of another one shortly thereafter. Several flights were sent to Sheremetyevo and Vnukovo. Approximately six flights were delayed by approximately two hours, another flight was delayed by five hours. Rosaviation confirmed that by 17:35 PM MSK at Domodedovo the landing of flight was fully recovered. Accordingly, there was no transportation collapse. Investors in Russia are not easily frightened. By 1:00PM MSK on January 25 Aeroflot shares were trading at 78.25 rubles. (0.3% to the previous day's close), UTair shares were trading at 17.60 rub. (-0.2%).

The negative internal background did not prevent Bohdan Zvarich, an analyst of Nettrader.ru, from suggesting the growth of futures for U.S. indices and oil prices. He believes that this trend will "support the shares of oil and gas sector, and will allow the "bulls" to attempt to break yesterday's highs. Opening of Europe can also support the purchase, however, in anticipation of the end of the Fed meeting, the activity in the markets can be reduced, leading to a moderate movement with respect to yesterday's closing levels. In the afternoon, the players' attention will switch to the reports of U.S. companies, but at the end of the session to the data on new home sales in the U.S., which will set the mood for the last hours of trading." Nevertheless, the Russian stock market that had an energetic kick-start in the beginning of the year will likely not be able to show impressive results in January.
Investors still do not have confidence in the Russian investment climate.