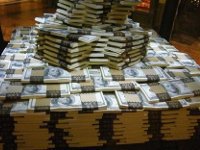 Hong Kong has been recognized the world leader in the field of economic freedom for the 17th time in a row. According to the research conducted by Heritage Foundation, Hong Kong received 89.7 of 100 points on the economic freedom index. The average global index makes up 59.7 points.

"Hong Kong, one of the world's most competitive financial and business centers, demonstrated a high degree of resilience during the global financial crisis," the report said.

The research embraced 183 countries. The USA takes the modest ninth place on the list of the countries that scored most in terms of economic freedom. The UK did not even make it in the top ten, having dropped from the 11th to the 16th position.

Russia takes the 143rd place on the list. Russia can find a consolation in the fact that it is followed by Zimbabwe, which took the 178th place, and North Korea, which "prestigiously" takes the fourth place from the bottom of the list.

John Tsang, the Financial Secretary of Hong Kong, believes that the competitive ability of Hong Kong's economy is determined by the firmness of public and political freedoms and the freedom of business activities, which let many companies succeed in Hong Kong.

One of the most important constituents of economic freedom in Hong Kong is the supremacy of law, civil rights, influential mass media, free movement of capital, commodities and labor, as well as the multi-cultural, tolerant and multinational community of its population. Hong Kong's past and present success lies in its amazing ability to adjust to new reality and show proper reaction to regional and global challenges.

Hong Kong profited greatly from the speedy growth of the Chinese economy and from its special relations with the "middle country." After the unification, the economy of Hong Kong began to develop incredibly fast owing to Hong Kong's dual role as the most international city, as well as owing to China and Asia on the whole.

Organic advantages of the local market are supplemented with favorable macroeconomic situation, because it works under special conditions, within the scope of the Special Administrative Region of China, which exists in China as "one country - two systems" concept. That is why, on the one hand, it is a highly developed cosmopolitan market, which operates according to Western standards. On the other hand, it is the territory which can become a springboard for developing the colossal potential of mainland China.

In 2010, China left Japan behind in terms of the Gross Domestic Product and became the second biggest economy after the USA. In addition, China accumulated world's largest gold and currency reserves evaluated at $2.65 trillion, according to most recent official data.

Hong Kong, its economic advantages and freedoms, has been an attraction to the Russian business recently. Russia's RBC organized the Russian-Asian investment forum in Hong Kong at the end of 2010.