Europe stands on the brink of new crisis 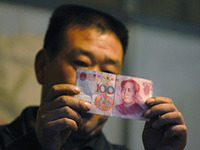 Debt crisis of the European countries of Spain, Portugal and Greece will cause the EU to experience a new crisis, says Ethan Harris, principal analyst for the economies of developed countries BofA Merrill Lynch. The crisis will begin in the coming months if the EU does not find ways to solve sovereign debt problems. Yet, China is already rushing to help and ready to buy Spanish bonds.

Infox.ru is citing Harris who said that the EU continues to take steps which in reality do not solve the problems of the market and the economy, and raise serious concerns about the situation with the European banks. So far the EU has not comprehensively addressed the banking problem. This means that in a few months the crisis will reemerge.

This has a negative impact on the single currency, the expert believes. He said that in the short term the dollar would rise against the euro, because the crisis in Europe continued. But in the long run, the exchange rates would stabilize. Both the U.S. and Europe face serious problems, and the possible consequences of this are mitigated by developing countries. But in fact, neither the U.S. nor Europe can now have a strong currency.

At the end of the last year the Speaker of Slovak Parliament Richard Sulik said that the actions of the European Commission could not be considered responsible. "Financial infusions can save Greece and Ireland, perhaps - Portugal. The attempts to rescue Spain are a gamble with the euro," said Sulik. He added that Italy in general is out of the question since its debts are twice as high as those of Greece, Ireland, Portugal and Spain combined.

China is trying to take advantage of the European debt issues and enter Europe. Chinese vice Premier Li Keqiang said that China was willing to buy Spanish bonds, while Spain is in a difficult position because of rising interest rates on debts, and sign multibillion-dollar contracts with the Europeans.

Lee is now preparing for visits to Spain, Britain and Germany, and outside observers include Deputy Prime Minister in the list of possible successors of Wen Jiabao as the prime minister.

In late December, against the backdrop of another wave of panic over the fate of the euro zone and sovereign debt, another Chinese vice Premier Wang Qishan promised to support the EU by purchasing bonds.

Finance Minister of Portugal Fernando Teixeira dos Santos also spoke about willingness of China to take care of the country's debt and increase investment in trade and economy. According to unofficial information cited by RBC, China is willing to buy government bonds of Portugal for the amount of 5.4 billion euros.

As for Russia, the debt crisis in Europe should not create any particular problems for the country's domestic economy, Ethan Harris thinks. He predicts the economic growth in Russia in 2011-2012 to be at 4-4.5% per year.
The expert believes that, like many emerging markets, Russia is experiencing inflationary pressures that may be coupled with possible rate hikes by the Central Bank. However, the country's economy will be supported by a strong commodity market.

At the same time, bubbles are getting inflated in the emerging markets, the expert warns. He also believes that in the countries with developed economies many assets are overvalued. Nevertheless, the expert thinks that the U.S. and China will remain the leaders of developed and developing economies in the coming year, respectively.