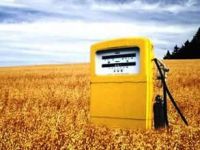 For decades, Professor Bautista Vidal alerted to the need of creating an instrument to protect the enormous potential of biomass energy that Brazil has. He defends a Public Company of Renewable Energy, also advocated by some thinkers and progressive social fighters as an effective way to block the ongoing brutal denationalization.

In recent years there has been massive denationalization of the ethanol sector in Brazil, culminating recently with the purchase of the greatest of all Brazilian ethanol, Cosan, Shell, one of the "seven sisters."

It has been revealed by the facts that the discourse of the imperialist countries in the international forums against ethanol, a discourse repeated by the academies and by the NGOs, handsomely paid by governments, was not able to hide the main interest that the larger consumers of oil feel for the control of the biomass industry. In fact, the anti-ethanol discourse interests them only while the control of this new source of energy is not wholly and entirely in the hands of foreign capital.

Recently, Petrobrás set up a line of ethanol firms to block the de-nationalization, aiming to become leader in the area. It was an attempt to run back making up for lost time, because it is estimated that around 40 per cent of ethanol has already been sold off to foreigners. The Lula government, accepting Vidal's nationalistic warnings, went after cointainment mechanisms, setting up a state company, Petrobrás Biocombustíveis, which was the right choice. This was however dependent on the production of soya, controlled in turn by a cartel of multinational firms in Brazil. Nevertheless it's a path to follow, the more so because it is immensely popular.

Besides, in the line of the ongoing re-nationalization process for oil, Dilma has already said that Brazil will continue to enhance its potential in the petro-chemical area, adding its immense potential in the area of chemical alcohol as a field of development for the production of fuels; also, derivatives such as green plastics, biodegradable plastics. What is surprising is that faced with this potential creation of income and jobs, and self-sufficiency in energy, specially in the area of family agriculture, decentralising development, a part of the political Left and social movements remain silent, outside the debate.

Or else, they limit themselves to the area of anti-ethanolism. Could it be that Darcy Ribeiro is right when declaring "Our Left needs a nationalist element"? Gandhi, in fighting against British colonialism, had to raise the flag defending the nationalization of salt.