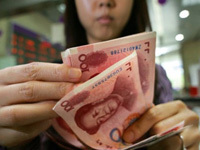 China will help the EU to fight the debt crisis. This was stated by Vice-Premier Wang Qishan at the opening of the Third Meeting of China and the EU on the issues of the economic and trade dialogue. China is ready to take "organized action," in particular, to continue buying up the bonds of those European countries that were hardest hit by the crisis.

For China, the EU is a major market for Chinese goods. In 2009, the volume of trade between the parties amounted to $429 billion. During the first 11 months of this year it has already exceeded $433.9 billion, which is 30% higher than last year.

China had a very sensitive reaction to the Greek issues. "When Greece has problems, China is ready to provide any assistance possible," said Prime Minister Wen Jiabao at a joint press conference with his Greek counterpart George Papandreou.

According to Wen Jiabao, Greece is the most "trustworthy friend of China in the European Union." The exact numbers of the European countries' debt purchased by the Chinese are not disclosed. However, the authorities of Portugal and Greece talked about significant investments of this kind.

Greece became China's best friend in Europe after the government of the country, concerned about the debt, began negotiations about introduction of Chinese corporations into strategic sectors of the country - transportation and tourism.

In particular, development projects in the ports of Piraeus, Thessaloniki, and Volos, railway construction and purchase of shipyards and shipping companies were discussed with COSCO (China Ocean Shipping Company).

It is worth noting that Greek ship owners control the largest merchant fleet in the world whose tonnage exceeds 20% of the world's volume. The fact that China supplies the bulk of their goods by sea is also well known. The Chinese government intends to establish a special fund of 6 billion euros for the "aid" to the Greek shipping companies.

In Greece, the growing presence of China is one of the most pressing and debated topics. The local population has negative feelings about it, which led to protests, which, incidentally, the Greek government has not paid much attention to.

Apparently, Beijing links the support for debt-laden European countries with the transfer of the most valuable (in terms of expansionary economic policies) assets of these countries to China. First of all it is strategic infrastructure.

A week earlier, Finance Minister Fernando Teixeira Portugal dos Santos talked about China's willingness to take part of the country's debt and increase investment in trade and economy. According to unofficial information, China is willing to buy government bonds in Portugal in the amount of 5.4 billion euros.

It is easy to see that three of the four troubled countries in Europe, united by the acronym PIGS, own decent port facilities, fleets and associated infrastructure (Portugal, Greece, Spain). These ports are southern maritime gateway to Europe, port staging areas where the Chinese can develop economic activities.

In particular, the Chinese intend to open their own businesses at the terminals of Piraeus Chinese to finish the products coming from China. This will allow them to sell products with the European labeling and directly compete in EU markets. Naturally, in this case Chinese are not very happy with the fact that Euro is dropping in value.

China's medium term goal is to fight against weak euro. Stronger European currency is beneficial for the Chinese economy as it makes the goods produced by China cheaper, and therefore more competitive. It should be noted that the statement of the Chinese officials about the financial support of European countries already had an effect.

On Tuesday, at the Asian trading floors the euro rose against 15 currencies, including the dollar. The euro exchange rate in Tokyo rose to $1.3171 from $1.3131.

China is also the largest holder of U.S. treasury bonds. In October, China bought U.S. debt at the amount of $23.3 billion. As of the end of October, U.S. debt to China was at $906.8 billion.

Beijing is interested in diversifying its huge foreign exchange reserves that have reached $2.5 trillion by mid-year. This year, Beijing tripled the size of investments in government bonds of South Korea, which already amounted to 5.15 trillion Korean won ($4.6 billion).

Therefore, European bonds are of interest to the Chinese for purely financial reasons. In addition, the yield on risky bonds of crisis-stricken European countries is above average, which allows for quite significant interest profits.