Development with social justice, the mark of Mercosul today 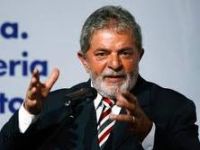 More than just promoting trade, the countries of Mercosul share a larger value, which is development with social justice. "That's the mark of Mercosul, which we are building," said President Lula on Friday (17/12) in a statement at the plenary session of the 40th summit of the bloc, in Foz do Iguaçu (PR). "And we have much to be proud of."

In 20 years of Mercosul, Brazil, Argentina, Uruguay and Paraguay were able to develop a historical process of political, economic and social conditions in South America, the Brazilian president said, noting that the achievements were obtained in an environment of peace and cooperation. As a result, the bloc's countries are experiencing a moment of extraordinary economic and social dynamism. While the Mercosul countries show consistent growth in their economies, well above the world average, developed countries are facing stagnation, unemployment and debt.

"Our integration model holds one of the highest global growths in post-crisis. While the developed economies are facing problems of stagnation and high rates of unemployment and debt, according to the numbers from CEPAL (Economic Commission for Latin America and the Caribbean), Paraguay will finish the year with the largest growth of all Latin America and the Caribbean - 9.7%. Followed by Uruguay (9%), Argentina (8.4%) Brazil (estimated at 7.7%), will have to be fifth in growth here in South America."

The president took the opportunity to go back to criticizing the way the developed countries have sought to address the crisis, punishing workers and rewarding "the foresight of unsuccessful speculators." Meanwhile, Argentines, Brazilians, Uruguayans and Paraguayans reiterate their determination to consolidate Mercosul, persisting on the path of convergence with other processes in Latin America, Caribbean and other regions - the meeting of the Mercosul Summit in Foz do Iguacu attracted senior representatives of Australia, New Zealand, Cuba, Palestine, UAE, Turkey, Morocco, Egypt, India, South Korea, Indonesia and Malaysia.

"Our block has become unquestioned reality. Trade within Mercosul grew eightfold in 17 years. We were one of the last regions of the planet to feel the effects of the crisis, and an early exit them. Our policies for growth with social inclusion and integration protected us from most adverse effects and prolonged the crisis. I have always insisted on defending the Mercosul in Brazil's foreign policy and had the fortune to meet many leaders with the same vision."