Olympic Games in Sochi to be most expensive in history 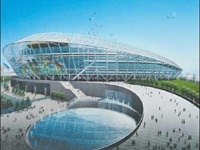 On December 10 Sochi Olympic construction was attended by distinguished guests - representatives of the International Olympic Committee and Deputy Prime Minister Dmitry Kozak, who oversees the project. According to Kozak, 2010 can be considered the beginning of mass construction of Olympic facilities. The preliminary cost estimated for the Olympics in 2014 is 950 billion rubles.

At a press conference in Sochi Dmitry Kozak said that Russia started the construction of over 120 sports facilities, "by the end of the year cumulative number of commissioned objects would be 50. In total approximately 100 billion rubles was spent on the Olympic construction."

According to him, Sochi has completely given into a furious pace of construction, and emerging problems are promptly resolved in due course. Experts have called this project the most expensive preparations for the Olympic Games in history, so Russia may already claim one record - Sochi-2014 may be worth over $30 billion, while other countries spent much smaller sums. Construction of objects of this level and in such quantity is never complete without financial abuse, but to date the theft of the budget funds for construction of Olympic facilities in Sochi has not been recorded, the deputy head of Russian government said.

Kozak stated that "according to the reports provided by law enforcement agencies, who, as you know, back in 2007 were tasked with strict monitoring of the optimal usage of the budget funds without add-ons or inflations - to date no theft of the state budget funds has been revealed." According to the schedule, by the end of 2010 Olympic Construction should be completed by 40%.

In connection with the consrtuction of objects for Sochi 2014, the city continues a large-scale program of resettlement of families whose homes are in the area of Olympic construction. By the end of 2011 over a thousand families are scheduled to relocate. Apartments in high risers will be free for the families that had lived in dilapidated buildings or in dormitories, media reports.

According to Kozak, the resettlement of the apartment buildings is the solution of an enormous social issue. "500 families are to move out of dilapidated housing at the same time since residential construction has been ongoing. Landscaping and the surrounding area infrastructure will also be completed. Other pre-existing homes are being repaired, they are repaired at the expense of Housing and Utilities Reform Fund, too, with federal subsidies, so that the entire territory has an appropriate aesthetic appearance, and people get comfortable living conditions," he stressed.

The scale of the expenses is, of course, impressive, but all calculations make it clear that in a project of this level and significance in the light of the impending upgrade, saving on some specific areas of work will not work. For many years Russia has been trying to create an occasion so it could make a strategic leap forward. The country got this chance by winning the right to host two important games of our time - the Sochi Olympics and World Cup 2018, which still require huge financial investments. According to the Russian Reporter, Russia will have to build and modernize its roads, rebuild airports in all major cities of the European part of Russia and renew its vehicle park, build hotels and stadiums, increase the productive power of the construction industry, develop communications sector and even children's sports that has been in critical condition for years. It makes sense to hope for the best - in spite of the prevailing traditions.