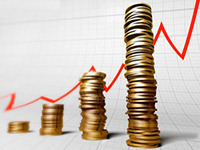 Sergey Ignatyev, the head of the Russian Central Bank, did not exclude a possibility to raise the official bank rate next year to curb inflation. Ignatyev forecast the growth of crediting and the economy in 2011 by 20 and 5 percent respectively.

To curb inflation, the CB will use interest rates and reserve requirements. The latter should work in case of the influx of credit assets from abroad, since CB's interest rates are incapable of affecting the rates of the banks that attract funds from other countries.

January is a traditional month of high inflation in Russia. The driving force here is raising the tariffs of monopolies. The new year will see the consequences of poor harvesting in the world that spurred food inflation. Some experts believe that Russia will have to face the price tsunami next year for the first time in 3-5 months.

According to experts' estimates, the price growth in December will make up 1.0 percent, whereas year-end inflation is not likely to drop below last year's 8.8 percent. The price tsunami is expected during the upcoming months, though.

The head of the Central Bank also said that Russia's balance of payment was still positive, which supported the ruble rate. Oil prices have been growing steadily recently; some analysts say that it may soon hit the forgotten $100 per barrel.

In November, Russian banks increased their credit volumes provided to corporate borrowers and the population by 1.4 and 1.7 percent respectively. Past-due payment on the credit portfolio in November decreased by approximately one percent.

To calculate the index, they consolidate balance of accounts on interbank credits in all credit organizations. The result is then corrected to the amount of transfers inside groups of banks and correlated with the total value of liabilities of the banking system.

The growth of the system risk entails the growth of rates of the financial market. If the Central Bank raises its rates, the growth of the volumes of crediting will be complicated except for the sector of consuming credits and the aspiration of the state to run into debts.