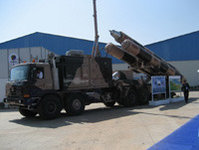 India was not certain whether the tests would end successfully, because there were failures during the previous test launches of the missile. That is why it was decided to evacuate 3,200 villagers prior to the recent launch.

Indian ground forces already have five mobile BrahMos complexes. However, the previous launches of the missiles showed that their software needs to be seriously developed. Now it seems that the problem has been solved. The December launch has become yet another successful test of the ground-based missile complex.

According to military experts, BrahMos is a new generation of cruise missiles. Some foreign analysts believe that it is a thoroughly modernized version of the Soviet P-800 Onyx missile, which was built at the end of the 1980s. A BrahMos missile is ten meters long; its starting weight varies from 2.5 to 3.9 tons depending on the basing mode. The weight of the warhead reaches 300 kilograms. One of the basic advantages of the weapon is the speed - up to 3,500 km/h. This is the only cruise missile that is capable of developing such supersonic speed. For example, the USA's renowned Tomahawk flies at the speed of only 880 km/h. BrahMos's speed made many foreign experts believe that Western missile defense systems will not be able to intercept the new missile.

Nikolay Novichkov, editor-in-chief of ARMS-TASS news agency, said in an interview with Pravda.Ru that BrahMos was indeed a unique missile.

"No other missile in the world can fly at the speed of BrahMos. Indeed, it is very hard to intercept it. In addition, this cruise missile is a high precision weapon. Russia makes most of the components for the missile, whereas India provides software. One should bear in mind the fact that the usual "seller-buyer" scheme on the market has been changing on the arms market during the recent years. No one wants to buy simply hardware right now. Many countries want to receive both hardware and technologies. Therefore, the Russian-Indian cooperation in the development of the BrahMos missile is an example of successful technical cooperation on the modern arms market.

"I'd say that BrahMos Aerospace is the most efficient enterprise in the field of arms trade and its promotion on foreign markets. As for the sea-based BrahMos missile, the warships, which India currently orders from Russia, are being equipped with BrahMos launch systems. The air-based version of the missile will be developed for Su-30MKI among other fighter jets. Therefore, India will gain considerable advantage over Pakistan once it has the new missiles in the national armed forces.

"The tests of the hypersonic version of the cruise missile may start in 2015-2017. The hypersonic BrahMos will be able to develop the speed of up to 5,000 km/h, which will make it even more invincible for air defense systems," Mr. Novichkov said.