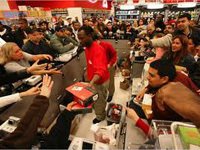 It seems with each passing year the madness on Black Friday gets even worse. This year, there were reports of fights and rioting from coast to coast. It was estimated that over 180 million U.S. shoppers headed for the stores on Friday, and whenever you get that many people together there are going to be problems. But just how crazed ordinary Americans are getting over saving a little bit of money is deeply disturbing when you really start thinking about it. If people will go this wild just to save 40 percent on a television set, then what in the world are they going to do when they have been without food for a couple of days? If Americans will act like psychotic animals just to save 50 bucks, then what in the world will they do when they have lost everything and are desperate to survive?

All of us had better hope and pray that an economic collapse does not happen any time soon, because it is becoming increasingly apparent that the American people are not morally equipped to be able to handle one. Greed and selfishness have become so rampant in America that large segments of the population have totally forgotten how to be any other way.

If the United States ever experiences a really, really bad economic downturn, this nation could very quickly start looking like New Orleans after Hurricane Katrina from coast to coast. Most Americans would simply not know how to handle it.

The following are 9 shocking examples of Black Friday violence that should make all of us wonder what is happening to America....

#1 At a Target store in Buffalo, New York the crowds waiting impatiently outside suddenly became a chaotic mob once the doors opened at 4 AM on Friday morning.

One man that was lying on the ground remembers thinking "I don't want to die here" while he was being trampled by crazed shoppers....

#2 Crowds were becoming so violent at a Wal-Mart in Sacramento, California that the police actually evacuated the store early Friday morning.

#3 Three women from West Palm Beach, Florida said that $1,000 in presents that they had just purchased at Best Buy were stolen from their vehicle on Friday morning within minutes of being purchased.

#4 One U.S. Marine reservist that was collecting toys for children was stabbed with a knife when he attempted to stop a shoplifter in eastern Georgia on Friday.

#5 Blogger Lynne Elder-Blau has posted about overhearing police officers describe a huge brawl that erupted this year at one well-known store on Black Friday....

Well, the girls and I were in a popular convenience store in Garden City last night while a store employee and a Garden City Police Department Officer were visiting. They were conversing about a large group of customers who got into a knock-down brawl at a nationally-known variety store in Garden City yesterday morning. Several police officers were brought in to break up the ball of adults who were pulling and tugging at products and actually punching other customers in their faces and stomach areas! We're not just talking about a few people who were involved in this violent non-sense. The officer said that there was a large amount of people involved in this particular altercation. Ridiculous!!!

#6 A 21-year-old woman from Middleton, Wisconsin was arrested when she threatened to shoot other shoppers while waiting to get into a Toys R Us store for Black Friday. The other shoppers had objected when she attempted to move to the front of the line.

#7 The following is video of customers literally tearing apart a store display at a Wal-Mart in Douglasville, Georgia as they pushed and shoved each other in an attempt to grab the best deals....

#8 The Los Angeles County Sheriff's Department actually "locked down" a section of a Cerritos, California shopping mall after a wild fight broke out in the food court. There were even reports that some people were flinging chairs at other customers.

#9 At one Wal-Mart in Texas, a near-riot broke out right in the middle of the store as a huge crowd of customers pushed and shoved each other to get a handful of Black Friday deals that were being wheeled out to the floor....

If you want to see even more videos of Black Friday craziness, check out this and this.

Remember, the products that these Americans are fighting over are not free. This is how crazy people are willing to go just to get a deep discount on an item.

So what is going to happen someday when people are desperate for food or shelter?

If this is how people act when the sun is shining, how are they going to behave once a really bad storm arrives?

In America today, fewer and fewer people are treating others the way that they would like to be treated themselves.

Instead of showing others kindness and respect, in 2010 most Americans would seemingly rather trample anyone who is in the way of getting what they want.

So what do you think? Are Americans becoming more greedy and more selfish or are they basically "good" and "decent" people most of the time? Feel free to leave a comment with your opinion....