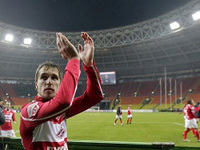 One of Russia's most popular football clubs is going to sign a sponsorship contract with Herbalife, a global nutrition, weight-loss and skin-care company. The company became known in Russia nationwide during the 1990s. Thousands of Russians with large pins saying "Lose weight now, ask me how" were trying to sell company's products to anyone in an attempt to return what they had to invest in the products.

Herbalife is still a successful business project. In 2009, the turnover of the company made up $3.8 billion. In Russia, however, the image of the company was ruined. Now the company is trying to retrieve its reputation in the country with the help of the most popular football team, Spartak. What is going to happen to Spartak's reputation, though? It seems that the supporters of other Russian clubs will have a perfect reason to take their rant to new forms and dimensions.

The official website of FC Spartak says that one of the leading football teams in the word, Barcelona, signed an agreement in June of this year to have Herbalife as the primary nutrition sponsor of the club.

Herbalife will participate in the development of the sports nutrition program for the FC Barcelona, the message of the website says. In addition, the sponsor will receive the rights to use the logo and images of the team. Herbalife will be advertised on Barcelona's home arena, and the footballers will be able to take part in Herbalife's events.

The company's contract with Spartak will be similar to the ones mentioned above. It goes about the sponsorship based on cooperation between specialists (club doctors and Herbalife experts) and about the inclusion of Herbalife products in players' menus.

The contract with Spartak is reportedly evaluated at $10 million. Herbalife logo will be placed on the back of footballers' T-shirts, underneath their numbers. This place is currently taken by Alpari, a leader in online trading. Alpari brings Spartak approximately $5 million a year.

Spartak's budget in 2009 made up $65 million. This is not the largest budget among the clubs of Premier League, but Spartak footballers get paid up to $160,000 a month.

Founded in 1922, Spartak won 12 Soviet championships (second only to Dynamo Kiev) and 9 of 18 Russian championships. They have also won the Soviet Cup 10 times and the Russian Cup 3 times. Spartak have also reached the semi-finals of all three European club competitions.