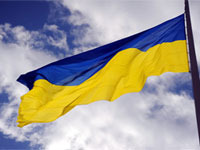 Small businessmen protest against the new Tax Code in Ukraine. There are many flaws in the document indeed, but it was passed in a rush because Ukraine had to meet the requirements of the IMF. At present moment, the IMF is a savior for Ukraine - economic catastrophe is inevitable otherwise.

Lithuania's ex-President Valdas Adamkus visited Kiev several days ago, where he met Ukraine's ex-President Viktor Yushchenko, to celebrate the sixth anniversary of the orange revolution. This year, though, there were no massive celebrations in the country. On Kiev's central square one could see many demonstrators. However, the slogans, which they were carrying and chanting, had nothing in common with the events, which rocked the former Soviet republic six years ago. Spokespeople for Ukraine's small business gathered on Maidan to protest against the new Tax Code.

According to the protesters, the new code has been passed in the interests of large enterprises and strong financial and industrial groups. Some of them sponsor the pro-presidential Party of Regions. For small business, the protesters say, the new code means nothing but bankruptcy and unemployment.

The authors of the new Tax Code say, though, that both large and medium-size business will be satisfied with the planned novelties. The majority of small businessmen will manage to get used to the new rules, they say. The tax reform, the authors say, will target the reduction of the share of shadow sector in the economy. For many years, the size of the sector was estimated at 50 percent of the entire national economy.

The nation's budget for 2011 directly depends on the rules of the game in the field of tax policy. If Ukraine does not approve the budget, it will be impossible for the country to receive another tranche from the International Monetary Fund.

Two weeks ago, the World Bank Director for Ukraine, Belarus and Moldova, Martin Reiser, stated that the Ukrainian economy had a potential opportunity to grow by seven percent a year. The European Bank for Reconstruction and Development improved the forecast for the growth of the nation's GDP from 4 to 5 percent in 2010. For 2011, the forecast was improved from 4.1 to 4.5 percent. Fitch Ratings forecasts the GDP growth in Ukraine on the level of 5 percent at 2010 year-end and 4.5 percent - at 2011 year-end.

Moody's Investors changed the forecast for Ukraine's government liabilities (B2) from "negative" to "stable" and improved a couple of sovereign ratings of the country.

Standard & Poor's raised the long-term sovereign credit rating of Ukraine in the middle of May from "B-" to "B" in foreign currency and from "B" to "B+" in national currency.

Such positive forecasts seem to be hopeful, but the sitting Ukrainian administration is aware of the real state of affairs in the country. Never-ending elections made the political forces compete in populism, the industrial output was declining, the social spending had to be increased.

The new Ukrainian government chaired by Nikolay Azarov inherited hopeless debts and had to continue the cooperation with the IMF. Now the government has to deal with new loans on tougher conditions to avoid default and to continue servicing previous loans. As a result, Ukraine's national debt makes up nearly 40 percent of the annual GDP. Together with the debts of private-owned companies, the national debt of the country is comparable to the GDP.

Ukraine has only one way out: to launch the economy, cut the shadow sector and increase budget revenues, to support exports and increase the amount of currency profit. Ukraine understands that this highly complicated mission can be successful only with Russia's assistance. This implies acceptable prices on energy carriers, joint projects and many other things. The previous leaders of Ukraine were destroying the nation's economy spitting at their neighbor, fouling their own nest.

The nearest elections in Ukraine will take place in two years. The Ukrainian administration will have to use this time to make a step back from the abyss. There is no place for jokes anymore, and the country does not have a right to make a single mistake.