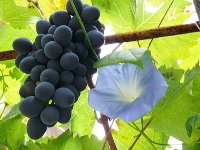 This year, the area of the vines in the world has decreased by 70 thousand hectares due to a reduction in the EU, the U.S., and some countries of the Southern Hemisphere. The information was reported by the International Organization for wine production and grapes (OIV). Production of wine in the world this year will fall by 4% or 10.7 million dal, and will amount to approximately 260 million dal.

Of the major manufacturers in Europe (Spain, France, Italy), only the Apennines will preserve the same amount of wine production at 35.1 million liters of wine. In general, EU wine production is projected to decline by 6%, despite the fact that in Portugal, Greece and Bulgaria there will be more wine produced this year than in the past.

The decline in production of wine in the main countries of the EU this year is caused by the problems with the crop that have been plaguing manufacturers since 2007.

According to the OIV, the countries of the Southern Hemisphere, the U.S. and Switzerland will produce 1 million dal of wine less than in 2009. In the U.S., the decline is expected to amount to 9.3%, in Switzerland - 15%. As for the Southern Hemisphere countries, Argentina is to increase the production immediately by 33%. Some increase in the volume of wine is expected in Chile.

The main questions which arise in connection with these reports is whether this will lead to a shortage of the product and whether there will be higher prices for wine for the consumers. At first glance, it can actually cause a rise in prices, but it is not so simple.

Stubbing of the vineyards that is ongoing in the EU has to do with a long-term decline in demand for wine. In addition, the European Union has a program of compensation for the disposal of unprofitable vineyards which cause overproduction of wine and a drop in the price of the product.

Earlier, European authorities have provided extensive support for winemakers who transformed wine into alcohol. In addition, producers received a subsidy of 1 Euro per 1 liter of wine for enhancing exports under the conditions of overproduction in Europe. However, wine is produced in too many countries, including those in the New World. Yet, the most notable success in the export of wine among the European countries was achieved by Italy, although the most well-known brands are manufactured according to the tradition in France.

The idea of recycling of the excess wine into spirits was not very effective. It turns out that the wine leaves for the market of spirits, which competes with the wine segment. This leads to the destruction of the own wine markets of the countries-manufacturers. Traditionally, the largest amount of French wine is consumed in France, Spanish wine - in Spain, etc.

As a result, for the past 10 years in Europe the vineyards for the production of mass consumption wine are being destroyed, and only those that produce quality vintage wine are saved.

Premium wine is the segment where the prices will not only remain at the same level, but will likely rise as the demand is stable and production volumes are limited. Some experts expect the growth of wine consumption in the category of expensive wines in China, which could push the prices up. However, some experts insist that the change in dietary habits throughout China is impossible, and the middle class will not be able to handle the surplus.

As for the price of wine in Russia, the European price fluctuations are accompanied by in-country customs and tax, as well as marketing peculiarities that can dramatically alter the global trends. Most likely, wine will not get cheaper in Russia.
For example, according to vendors, restaurateurs' markup on wine is on average 300%. Restaurateurs themselves are criticizing their working conditions and informal fees, which make their survival possible only with the obscene markups.

"We would very much like in the next few years to increase wine consumption in Russia up to three times so it would reach the European average," said in a commentary to GZT.ru Valery Filatov, one of the founders of the Association of importers of wines, head of United Distributors." In 1980, the level of wine consumption in the Soviet Union was 21liters per person per year. Thirty years later it is only 7 liters. This is 6% of all alcoholic beverages consumed in the country." In general, Russia is securely held in the grip of vodka and beer, which leads to ultra-high mortality rate of the consumers.