The cadmium curse of Coca-Cola 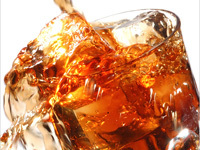 Coca-Cola is withdrawing 22,000 collectible glasses from the US market. The paint, which the world's larges producer of soft drinks used for its glasses, contained toxic cadmium. The concentration of the cancerous substance is very insignificant; it does not pose any danger to consumers, company officials claim.

The press release from the company said that the drinking glasses were being recalled due to quality issues, rather than health hazards.

News reports about toxic drinking glasses appear on a regular basis. In October, for instance, it was said that toxic glasses by a Chinese company could be delivered to Russia's Khakasia Republic. Hazardous content of benzol was found in baby cups made by Surpass Arts and Crafts Co. Ltd. (China). Chronic benzol poisoning may trigger leukemia and anemia (shortage of hemoglobin in blood).

The story with cadmium, paint and glasses occurred to the world's largest fast food chain McDonald's in June of this year. The company recalled over 13 million drinking glasses with images of Shrek cartoon characters on them.

Cadmium is a known carcinogen that can damage bones and kidneys, especially in young children and if it accumulates over time. Cadmium sulphide is used in the production of paint (the yellow color) and in photography. The metal is highly toxic and has an ability to accumulate in the body.

Cadmium deteriorates liver, kidneys and the heart muscle. The US Center for Disease Control and Prevention lists cadmium as the seventh most hazardous element. The entire lists counts 275 toxic substances.

It is generally believed that drinking Coca-Cola is not very good to your health. The ingredients of Coca-Cola Light - Agua carbonatada, E150d, E952, E950, E951, E338, Е330, Аromas, Е211 - can be considered safe healthwise only with certain restrictions. This drink has only two absolutely safe ingredients: carbonated water and E330 (citric acid).

Coca-Cola deals with product quality complaints on a regular basis. Most often, it occurs with so-called regional drinks, produced under Coca-Cola license in different countries of the world. This gives the enterprise an opportunity to refer to such occurrences as violation of production technology rules. In 1999, hundreds of children were hospitalized in Belgium and France with food poisoning. All the children drank Coca-Cola. In 2006, the sale of Coca-Cola drinks was banned in several Indian states: the concentrations of pesticides in them exceeded the norms 30 times.