World stands on the brink of food crisis 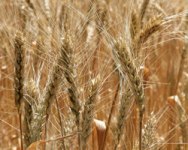 World imports of food will exceed the level of $1 trillion as of the year-end because of the growing prices on agricultural production, UN expert said. Next year, many countries in the world may face the problem of food shortage. In the meantime, US authorities announced considerable losses of harvests of corn and barley.

According to the United Nations Organization, 80 countries suffer from a shortage of food. Thirty of them may find themselves in a critical situation already in the nearest future. The supplies of wheat in the current agrarian year will drop by 5.1 percent to 647.7 million tons in the world. The demand will hit the level of 668 million tons.

The FAO Food Price Index reached the maximum in September since July 2008: 197.1 points, having climbed up from 188.7 points a month earlier. The index includes crops and oil crops, milk, meat and sugar.

By the end of 2010, the import production for the above-mentioned products will become 11% more expensive, according to FAO. In 2011, the index may grow by 20 percent. Separate kinds of foodstuffs will become 40 percent more expensive. The food prognosis urges the countries to activate their production to replenish their food reserves.

A state of shock is not expected for Russia, but it seems that it will not be possible for the country to avoid food inflation. According to FAO, the production of crops in the Russian Federation dropped by 14 million tons and will make up only 3.5 million tons because of extremely high summer temperatures. Russia's internal reserves will drop by 4 million tons.

Last Friday, the US Department of Agriculture said that the national harvest of maize would most likely drop to 14-year low. The shortage of the feeding crops may result in a crisis not only on the crop, but also on the meat market, experts say.