Russian soldiers to be dressed in state-of-the-art uniforms 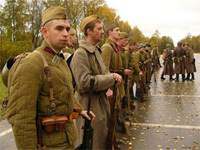 Russian military men will be outfitted with state-of-the-art uniforms. The new uniforms will protect them against fire and cushion the consequences of bullet impacts. The new uniforms are to be introduced already next year. The program will cost Russia 5.5 billion rubles, Dmitry Bulgakov, Deputy Defense Minister of the Russian Federation said.

The delivery of new fabric for the Russian Armed Forces has been included in the state defense order for 2011, a spokesman for a group of textile companies Dmitry Rybakov told Interfax. The new "Termofort 220" heat-resistant fabric is made of aramid fiber and protects a human being from fire and high temperatures.

"The fabric neither burns nor melts, and it is resistant to contacting solid surface heated up to 400 degrees Celsius. The fireproof and stability qualities of the fabric do not depend on the number of washings or dry cleanings, the official added.

"Fort 220" fabric is going to be another novelty for the Russian army next year. The fabric is used for designing bulletproof vests and coatings for helmets. This is 100% polyamide fabric that can withstand strong impacts and breaking loads up to 20,000 newtons.

It was reported on November 10, 2010 that the federal budget plans to assign over 25 billion rubles for purchasing new uniforms for military men in 2011-2013. The material support for the Russian army will cost approximately 38 billion rubles in 2011-2013, reports said.

"I don't know where this number comes from. The introduction of the new uniform next year will cost 5 or 5.5 billion rubles maximum," the official said.