If gentlemen cannot play by the rules, they change the rules 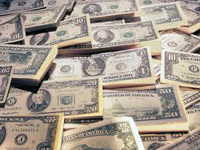 Emission activity of the United States continues to promote the growth of commodity assets where investors find safe anti-inflationary shelter. The U.S. decision to launch another emission of the dollar not only undermines the credibility of their currency as a single equivalent value, but also provokes a rise in inflationary risks which creates new bubbles in the markets.

Cheap liquidity, as has been noted earlier, is mainly spent in the commodity markets. Since the uncertainty in the economy is still extremely high, the money first goes to the segment of precious metals (gold and silver).

The growth of the precious metals continues, and numerous mantras of analysts provide a speculative demand. Since August, the price of gold rose nearly 20%, while silver has added even more - over 50%. However, this does not mean inflation correlation alone. Since August, the dollar index (the rate to the basket of currencies) had a downward adjustment of a little over 5%. Most experts do not deny a speculative component.

In its desire to smooth out volatility in the market, the largest stock exchange group CME Group (Chicago) (the group that has the greatest number of deals on silver) increases the margin requirements for silver futures from $5,000 to $6,500 per contract of 5,000 ounces. This has caused the quotes to collapse by 10%.

The last drop of this scale has occurred on the so-called Silver Thursday in March of 1980. Then silver quotes prices at Comex have collapsed by 50% in 4 days due to the change in bidding rules. Incidentally, Comex was subsequently acquired by CME that uses the same methods.

Improving the collateral on the Stock Exchange from $5,000 to $6,500 (+25%) per contract of silver, CME "knocked out" small buyers and speculators from long positions, thinks Alexei Viazovsky, an analyst with Kalita-Finance.

"If the market makers (MM) sell more than they buy back, they form a position," says Viazovsky. "MM Institute was formed by a number of organizations affiliated with large brokerage houses and banks. The latter, in exchange for a mandatory (!) fixed fee, have to sell assets when customers want to buy and buy when customers want to sell. This means that those who have been selling more than they have been buying since August have lost or may lose (if the position is not closed) up to 60%! Do you think that organizers of these trades will be satisfied with such loses?

On average, no more than 5% of the buyers of futures require physical delivery of an asset, but if the stock market panics, including a sharp rise in prices, the number of such customers grows significantly.

"What if you sold silver that you cannot physically supply? What do you do? It is worth mentioning a classic English saying: "Gentlemen always play by the rules. If gentlemen cannot play by the rules, they change the rules." This is exactly what the gentlemen in America are doing," said Alexey Viazovsky.