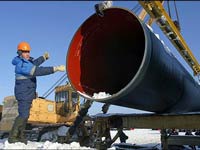 The European Union administration intends to deprive Russia's gas giant Gazprom of the monopoly to distribute natural gas to European consumers. On October 15, the European Commission demanded amendments should be introduced to South Stream intergovernmental agreement signed between Russia and Bulgaria.

Marlene Holzner, the European Commission energy spokeswoman, believes that other EU countries should have third party access to Gazprom's pipe. The agreement between Russia and Bulgaria, Holzner said, needs to be changed and brought into compliance with European laws.

It goes about the need to grant third party access to gas transportation capacities. In this case, Holzner resorts to the Third Energy Package, which the EU approved at the end of 2009. According to the document, all countries of the European Union shall ensure the division of gas sale and transportation business. Bulgaria, Holzner added, assured the European Commission that the required changes would be introduced.

European officials did not like the fact that the agreement with Russia obliged Bulgaria to provide complete and unrestricted transit of the Russian gas via its territory. To put it in a nutshell, Holzner clearly stated that Bulgaria should give third party access to Gazprom's pipeline.

"Nabucco is our priority because it helps to diversify the sources of gas supply," Holzner said. "In this respect, South Stream is a very important project, but in comparison with Nabucco it doesn't offer diversified gas resources. It is a new transit route," she added.

Alexander Rahr, the Director of the Berthold Beitz Center of the German Council on Foreign Relations said in an interview with Pravda.Ru that the above-mentioned events testified to the importance of the gas issue, which exists in the relations between Russia and the EU.

"The concerns, which the European Commission showed at this point, show that Europe does not want Gazprom to hold complete control over the shipments of natural gas to European consumers. They want to deprive Russia's Gazprom of the monopoly. European Commission members do not know how it could be done in practice. As a result, Europe may have serious problems with gas shipments in the future. Bulgaria is not the only example here. Let's take European Commission's attacks against Polish and German companies after they had signed adequate agreements with Russia," the expert said.

Ivan Rodionov, a professor of Higher School of Economics:

"It was clear from the very beginning that Gazprom would not have complete control over gas shipments. Coca Cola, for example, can not do everything that it wants to do in Russia. In Russia, this company follows Russian laws. As for the motives of the European Commission, Europe virtually claims that Russia does not have a right to own the resources, which Europe needs. They set out such claims to Bulgaria and Poland too because they are young EU members, who do not have the authority of Germany, for example," the scientist said.