Uncle Sam has too much gas 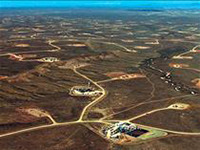 The U.S. is starting to supply gas to Europe. The surplus of domestic production and the active procurement of LNG in Qatar allowed the country to re-export gas using the so-called arbitrage transactions which means transferring purchased gas to new buyers. The first gas transport will come to the UK this weekend.

The re-export of gas to Europe from the U.S. indicates that shale gas is having an increasing impact on the global gas market. According to the International Energy Agency (IEA), the excess supply may cause gas suppliers to reduce prices.

In February, Gazprom postponed the project of the production of LNG at the giant Shtokman field in the Barents Sea, and one of the reasons for it was the fact that the target market - United States - does not need additional supplies.

On October 11, the Financial Times released a promise that in the next five years, the U.S. could become a major supplier of gas and compete with Russia and Middle Eastern countries in the Asia Pacific region. As noted in the comments by an employee of consultancy PFC Energy Nikos Tsafos, if the Americans would have supplied at least 10% of gas produced, they would become the market leader.

In 2009 the U.S. produced 620 billion cubic meters of gas, which is almost 40 billion more than Russia. Now the share of shale fuels in total gas production in America, according to the Energy Department of the U.S., is 15%.

The U.S. is the largest producer of shale gas in the world. In one year, gas production from unconventional sources, mainly from shale deposits, has jumped by 30 billion cubic meters. America's need in the imported liquefied gas has dropped sharply, and its price has dropped more than two-fold.

The closure of the U.S. gas market for imports hit the producers in other countries. In February of 2010, Gazprom has postponed the project for the production of LNG from the giant Shtokman field in the Barents Sea, including the fact that the U.S. target market is no longer in need of additional supplies.

Naturally, the world's LNG producers that were focused on the U.S. market rushed to Europe, which increased the competition on the continent. In the U.S. gas prices have collapsed precisely because of the oversupply of natural gas.

Therefore, shale gas companies that have licenses for the extraction of expensive gas are trying to jump on the external market within the US. In June, plans to export LNG were announced by the company Cheniere Energy, the operator of an import terminal in Louisiana. If all goes according to the plan, this company will be able to deliver gas from the United States around the world starting 2015. From the U.S. west coast shipments to Asia are carried out by Kenai.

The extraction of shale gas is cost-effective only at a certain level of world prices. It is substantially more expensive than traditional extraction, even in harsh northern climate where LNG plants are planned (Yamal LNG and, perhaps, Pechora LNG) in addition to the already existing Sakhalin.

However, the increase in supply can reduce the price of fuel and return the U.S. companies to the territories within the boundaries of their own continent. In North America, gas prices could grow as soon as the increase in export volumes balances the supply and demand within the U.S. This could only happen if no new much more cost-efficient technical method of recovering gas from shale is found.

Now companies are experiencing certain financial difficulties due to the high level of capital investment throughout the period of development, a permanent increase in the number of wells with low flow rate and hydraulic fracturing operation. In addition, shale gas extraction horribly disfigures the natural landscape, leading to contamination of groundwater and is hardly possible near densely populated areas.

The International Energy Agency (IEA) believes that the gas will be in highest demand in the world in the next 25 years. The main sources of rising demand are China and the Middle East. One-third of the production growth will occur in shale gas and other unconventional sources. However, in the next ten years, the supply will exceed the demand, so gas will drop in price, experts of the IEA believe.

In this regard, the agreement with South Korea (that frightened the entire raw material world by presenting hydrogen cars) regarding the plans to start natural gas deliveries to the country of at least 10 billion cubic meters of gas in 2017 looks promising.

Nevertheless, domestic consumers will be the ones to pay for the failures of Gazprom to form the infrastructure of LNG, which allows diversifying the markets. Since 2014 the prices offered by the concern to the Russian consumers will have to catch up to the European ones in terms of the return, but Prime Minister Vladimir Putin announced plans to bring the level of gasification of the country from the current 69.8% to 86% of the national average and up to 90% in urban areas by 2030.