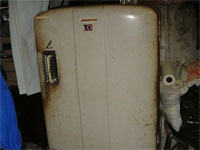 Israel's ministry for infrastructure and the ministry for social services have launched the implementation of the test project to replace outdated refrigerators owned by elderly people and needy families. The point of the project is not about governmental charity - it is about economy. Old models of household appliances consume too much electric power.

Israeli mass media proudly said that the idea belongs to the ministry for infrastructure, whose chairman, Uzi Landau, supports the reform in the energy field, which, among other things, includes the use of energy-saving equipment.

The criteria for the participation in the project were set by the ministry for social services. They envisaged low economic status of families of not more than five members, a minimal period of use of refrigerators and other factors.

Experts believe that removing outdated electric appliances and replacing old fridges with new ones will result in the economy of one million kilowatt hours of electric power a year.

It is worthy of note that the Israeli idea to utilize old fridges is not new. The Russian government, for example, approved the energy-saving program till 2020, the cost of which is evaluated at 9.53 trillion rubles. The program particularly stipulates propaganda actions for the population to make people replace fridges and washing machines older than 15 years with new models. In total, it is planned to replace 39 million fridges and 32 million washing machines.

The energy consumption of the Russian economy is 2.5 or 3.5 times as large as in developed countries. Officials say that the preservation of such a high consumption of energy will eventually slow down Russia's economic development. According to experts' estimates, about a quarter of fridges, that Russians have in their homes, were purchased during the Soviet era.