Anglo finance on the march 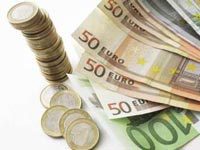 This week has seen an unparalleled assault upon the Euro by the Anglos. But, like most things, this is only another play in the dollar/pound death throws, aimed to take everyone down and drown them in blood, before they themselves die.

As everyone knows, the Anglo finance has been a cancer upon humanity for well over a hundred years now. It is this group, as I mention in The Six Evils of Wall Street and the Suffering of Humanity that brought us the Communist Revolution in Russia, the Great Depression world wide, the Rise of Hitler and WW2 (from which they again profited handsomely), the Cold War, the Asian Flu, the Rape of Russia and now the Greater Depression.

In this last bought, feeding the world lies and hoodwinking everyone, using their good name (why they still have one is pure PR), the Anglo unloaded poison on every economy in the world. Hundreds of millions have lost their jobs and livelyhoods, while the Anglo bankers laugh in their palaces. Tens of millions have lost their lives, not that it matters to these spawn of Satan.

But to survive, these elites must have more credit, more life blood, but that can only happen if there is no other choice than the bankrupt dollar and pound. To that end, the assault on the Euro has been long in coming.

First, Goldman Sachs, the vampire squid rapped around the face of all humanity, early on, helped crooks in the Greek, Irish, Portugees and Spainish governments hide their debts, for a price, knowing this will undermine the Euro, when the Anglo sponsored con game falls. When these nations started to fall, but were not enough to topple the Euro, stage two started.

Stage two came into effect this week, when US rating firms started a mass devaluation of the credit ratings first of Greece, than of Portugal and now of Spain, with Ireland, Iceland and Itally on the horizons.

Now, two questions are obvious: one: if these nations deserve to be down grades, whey are the US and UK still enjoying AAA ratings? The UK deficit, after nationalizing half their banking system, is 12.6%, .1% less than Greece. The British are printing cash as fast as they can, while their zero interest rate is bankrupting their own seniors. But they have a AAA rating? And the Americans? Hell, a nation that has present and future debt obligations of over 500% of their GDP, who is running deficits 150% higher than their budget is AAA? A nation that is a debtor to every third world hellhole in the world, while running only one industry: military, and importing everything else, is AAA?

The second question is: after all the lieing that these rating agencies did to create this Greater Depression, why does their ratings, or opinions (for what is their ratings but opinions) still matter? They are thieves and liars, why listen to them?

But why do this? Because without the Euro, investors will be forced to buy dollar and pound bonds and thus help, if for a little further, prop up the Devil and his Anglo puppets.