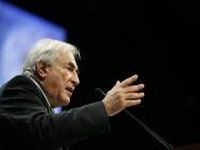 More than 1,500 international experts participating in the event heard Strauss-Kahn argue that it is necessary to strengthen international monitoring mechanisms against the crisis to prevent a worldwide economic collapse.

"Much has been done in terms of regulation, but not at the level of international supervision. And even the best regulations in the world are worthless without supervision," declared the general director of the IMF.

"The G20 leaders said loud and clear that they would reorganize the financial sector, but unfortunately the reality is more complex than that."

Strauss-Kahn also said that "the system is not as fragile as before the crisis, yet there is no guarantee that in five or ten years it cannot return to derail everything."