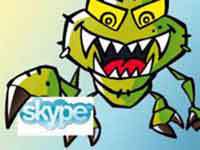 Russia's major cellular operator MTS supports the concerns of its two competitors about Skype in Russia. An official spokesman for the cellular giant said that Skype does not invest in the telecommunication infrastructure and provides cheap services to subscribers, which means that it parasites on alien networks, causing damage to the income of traditional communication operators.

The legal status of IP telephony (VoIP) has to be specified in Russia, participants of the round-table discussion about the issues of the market of alternative services of voice communication in Russia and the world concluded.

The discussion took place at Russia's Federation Council. Vyacheslav Novikov, the chairman of the subcommittee for natural monopolies of the Federation Council, stated that the flaws of legal regulation of IP telephony services, particularly Skype, lead to a number of problems. For example, when Russian subscribers use Skype's paid services, they find themselves legally unprotected because Skype does not hold Russian licenses, nor does it have any contracts with its subscribers. Therefore, the subscribers have no right to lodge service quality claims against the company.

Such problems are typical for not only Skype, but for other IP-telephony services in Russia as well. In most of such cases, an IP-telephony company is registered abroad, and its central server is located outside Russia too. The Russian division of such a company acts as an independent legal entity, not as a communication operator, and serves as an agent selling foreign company's services. Therefore, such operators neither receive Russian licenses, nor execute lawfully authorized electronic surveillance requirements for their networks as they should do in accordance with Russian laws, Prime Tass reports.

Pavel Roytberg, the head of the department for the development of products and services of MTS cellular communication operator, urged to look into Skype's activities in Russia from the point of view of anti-monopoly and communication legislation.

According to him, VoIP parasites on the networks of traditional service providers since they gain profit from inexpensive services without investing anything in the construction and exploitation of communication networks, as well as subscriber servicing. As a result, traditional operators suffer considerable losses, which affects their network investment opportunities.

According to the official, the market needs to elaborate regulations for Skype and other VoIP services in Russia. Roytberg referred to the practice of Vodafone, which either blocks access to VoIP operators in its networks or provides it separately at extra charge.

Long distance operators do have reasons to be concerned. Georgy Voronkov, an analyst with Investcafe, told Bigness.ru that Skype's services were considerably cheaper than those provided by Russia's Big Three operators (MTS, Vympelkom and Megafon). For comparison, a call on Skype to a cell phone in any country of the world costs 2.2 cents per minute (plus Internet traffic charges). A call from Russia to, let's say, Ukraine costs 1.18 euros at Vympelkom and 1.4 euros at MTS. Any calls inside Skype are free of charge globally.

"Such tariffs are not always positive for Skype itself. The company finished three of its four recent years with losses. In the meantime, monetization of video communication would help the company improve its condition. In 2009, people across the globe spent nearly 2 billion hours communicating with each other on Skype-to-Skype video calls. If a minute of such calls cost just one kopek, the company would have returned the profit of $40 million," the expert said.

The oppression, which traditional voice operators experience due to the development of VoIP services, is a global trend. In 2007, VoIP services took only two percent of the world Internet traffic. In 2008, the index increased by ten percent and may reach 20 percent in 2010.

Skype sticks to a different point of view, though. Jean-Jacques Sahel, Skype's European director of government and regulatory affairs, who also took part in the above-mentioned discussion, said that service providers can benefit from both direct partnership with apps and content developers and from the growing demand on network access on the part of consumers. Internet economy is a symbiotic ecosystem, where every member has an opportunity to succeed, the official said.

For the time being, there are three operators in the world that conduct active cooperation with Skype. They are Hutchison 3G (trademark "3") in Britain, Verizon Wireless in the USA and KDDI (trademark "au") in Japan. Skype officials claim that such cooperation helped Hutchison attract new subscribers and increase profit. Seventy-nine percent of Skypephone users are new clients of Three network. Thirty-six percent of new customers subscribed to Three to be able to use Skype on their cell phones.